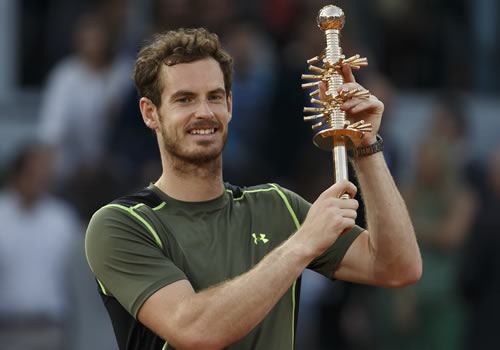 It is the season of the red stuff, the season that boasts three Masters and a Grand Slam along with 10 other tournaments in the space of two months, and all packed into Europe from Monte-Carlo onwards.

That is a lot of tournaments and a big chunk of the tennis season to yield not a single title, nor even a final—but that was precisely the scenario for Andy Murray through not one but 10 seasons on the pro tour.

There were reasons for this hole in Murray’s resume, as a look at 2013 explains. Murray had already made the finals of the Australian Open and won Miami, but he would win only three matches in that spring’s three clay Masters, and was forced to retire in Rome and pull out of the French Open. The problem was an old and chronic one: His back.

The slipping, sliding, and twisting movements required on clay always aggravated his lower back, as he explained in Rome at the time: “It’s lower left back… exactly the same as last year. But it’s not been perfect for a long period… The shots that hurt get more exaggerated on clay. With a lower back problem, rotation tends to be more of a problem… Injections can help but they didn’t make me feel 100 percent. I want to feel 100 percent.”

So the decision was inevitable: Murray underwent back surgery later that year.

Come the French Open in 2014, the Briton made the semis, and then last year, he won not only his first clay title in Munich but his first clay Masters the very next week, in Madrid. Another semi run in Paris, pushing Novak Djokovic to his five-set limit in the process, and Murray ended the year with the best clay win-loss stats on the tour, 17-1.

Murray opted to play the Monte-Carlo Masters this year instead of Munich, and reached the semis, where he took the first set off eventual champion Rafael Nadal. Now back to defend in Madrid, he has been talking to the tournament’s media about the impact of last year’s victory at the Caja Magica.

“Winning a clay court tournament was something that I found incredibly hard to do for a very long time, so to get the breakthrough in 2015 was a very special moment. Rafa is the greatest clay court player who’s ever lived so to be able to capture my first Masters title against one of the greatest on that surface was a very proud moment.”

Murray, indeed, did not just win the Madrid title against home favourite and clay maestro Nadal, but did it the hard way from start to finish.

He arrived from a rain-delayed Munich having played a three-set final a day late. A couple of days later, having hot-footed it to the very different clay of Madrid, he found himself playing in the early hours of the morning after the preceding matches all over-ran.

As if all that was not enough, he faced the big-hitting Milos Raonic in the Madrid quarters, the previous year’s finalist and Barcelona champion Kei Nishikori in the semis, and finally defending champion Nadal in the final. And although Nadal was still in search of his best clay form, he had beaten Murray in 15 of their previous 20 meetings, and in all of their clay matches. Yet Murray surged to the title, 6-3, 6-2, as though born to the red dirt.

He put much of his form down to rigorous preparation: “My preparation last year was probably the best it’s ever been for the clay. I spent two weeks in Barcelona training on clay, which enabled me to really work on my tactics and movement. I also won my first tournament in Munich the week before, so I had a lot of confidence going into Madrid.”

This year, he has trained in Majorca alongside Nadal, and still sees the Spaniard as one of the favourites here—not least because the most prolific winner on clay arrives on a wave of confidence after winning in Monte-Carlo and Barcelona.

“Every player goes through periods where they don’t necessarily play as well as they have done previously, but it’s how you react to that dip in form that is important. Rafa in my opinion is still one of the best players on the surface and he still works as hard as he can on and off the court.”

Naturally he sees Djokovic, who won here in 2011 but has not played in Madrid for the last two years, as another of the chief threats.

“At the moment Novak’s consistency is making him just that little bit harder to beat. He likes to play from the back of the court, he has incredibly consistent ground-strokes, so he likes to draw the points out. I think more and more guys are trying to make the points against him shorter… however he has the ability to make shots from everywhere so it doesn’t always work.”

Last year, of course, Murray added another milestone to Olympic gold and Wimbledon—not just a first clay Masters title but the Davis Cup. What, then, is his next target?

“Lots of things: I still have a good few years in my career, and I believe that my best years are still ahead. It would be easy for me to say that I want to win more Grand Slams, but the reality is that they are very difficult to win…

“To reach No1 you have to be incredibly consistent in tournaments, so I will just continue to focus on one tournament at a time, and make sure I keep working as hard as I can.”

Madrid, with its special conditions at altitude, may not be the perfect preparation or predictor for a first Rome or Roland Garros final for Murray—though he has reached the semis of both. For now, though, there is no doubt that the win last year against Nadal was a very special moment: “It will be really hard to top winning last year. Capturing my first clay court Masters event was an incredibly special feeling and something that I had worked towards for a very long time. The crowd in Madrid is always very vocal and the atmosphere in the final against Rafa was incredible. It’s something I’ll never forget.”

Murray is seeded No2 to Djokovic’s No1, with Roger Federer at No3 and Stan Wawrinka No4. That leaves Nadal, at No5, as the player that all four of the others will hope falls into a rival’s quarter! The draw is made at 11.30 local time on Saturday.

Five key areas where Liverpool have improved under Jurgen Klopp