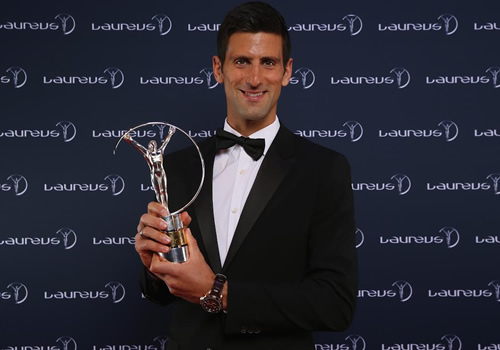 Not for the first time and probably not the last, tennis took centre stage at the prestigious Laureus Awards.

The two world No1s, Novak Djokovic and Serena Williams, won what are regarded as the sporting equivalent of the Oscars, claiming the two big individual statuettes as Sportsman and Sportswoman of the Year.

At the star-studded ceremony in Berlin, which was hosted by Hollywood actor Bill Murray, Djokovic accepted his award in person, having last week competed in the Monte-Carlo Rolex Masters, but Williams was unable to attend in person after hosting her annual Williams Invitational at her home in Florida.

Tennis, one of the most athletically demanding and gladiatorial of sports, has always maintained a high profile in the individual categories. This is Djokovic’s third award—he won last year and in 2012, while Williams has not only won three Sportswoman of the Year Awards but won the Comeback Award in 2007.

This was a remarkable 10th nomination for the winner of 21 Grand Slams, who maintained her dominance on the women’s tour last year by winning three of the four Majors.

Djokovic also won three Majors in 2015, reached the final of French Open, and amassed a string of Masters titles. Laureus Academy Member Boris Becker, now Djokovic’s coach, said: “He had a great year again. He’s played 88 matches, has won 82, he won three out of the four Grand Slams, reached the final of the French Open, he’s won seven other tournaments. Very few players, if any, had a year like that.”

Tennis has topped the individual categories many times since the inaugural Laureus Sports Awards in 2000.

Roger Federer won the Sportsman of the Year title four years in row from 2005 to 2008. Rafael Nadal won it in 2011, along with the Breakthrough Award in 2006 and the Comeback Award in 2014. Other tennis winners have included Justine Henin, Jennifer Capriati, Andy Murray and Marat Safin, while Esther Vergeer won the Sportsperson with a Disability Award twice, and last year, Li Na won the Exceptional Achievement Award.

Rugby was also a big winner this year, with the All Blacks taking the Laureus Team Award and Dan Carter receiving the Laureus Comeback of the Year Award, following the team’s Rugby World Cup success.

One of the highlights of the evening was a special posthumous Laureus Spirit of Sport Award to celebrate the life of Johan Cruyff, who died in March. It was received by his son, Jordi Cruyff.

The Laureus shortlists comprise six nominations in each of seven categories which are compiled from a ballot of the world’s sporting media, and the winners are voted for by the Laureus World Sports Academy, the ultimate sports jury that is made up of 50 of the greatest sportsmen and sportswomen of all time headed by Chairman Edwin Moses.

Sportsman of the Year: Novak Djokovic

Sportswoman of the Year: Serena Williams

Team of the Year: All Blacks

Breakthrough of the Year: Jordan Spieth

Comeback of the Year: Dan Carter

Sportsperson of the Year with a Disability: Daniel Dias