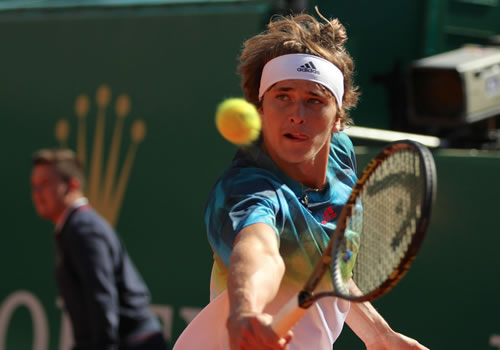 This year in Monte-Carlo, there are some new and exciting faces hoping to make a splash at the tournament on the Mediterranean. Three teenagers, all prominent in the ATP’s #NextGen campaign this year, feature in the main draw.

The highest-ranked of the trio, Borna Coric, has played only one match at the elegant Monaco club before, but that established the young Croat as a player on the march. He took Alexandr Dolgopolov to three long, tight sets before bowing out. He had already, as it happens, taken the scalp of Andy Murray in Dubai, went on to make the semis on the clay of Nice, and got the better of clay-court expert Tommy Robredo in five sets at Roland Garros.

Clearly a player of broad ability, Coric began 2016 with his first ATP final on the hard-courts of Chennai, switched to indoor clay to play Davis Cup in February—and took a two-set lead over David Goffin before losing in five—and prepared for his return to Monte-Carlo with another final run, this time on the clay of Marrakech.

That run, of course, delayed the 19-year-old’s arrival, so drawing a tough scenario for his opening match against the craft of Philipp Kohlschreiber: He could fit in only one day of practice on Monte-Carlo’s pristine courts.

A different picture was painted for the other two teenagers, both just 18 years old, both making their debuts at the tournament, both tipped to be stars in the very near future. As luck would have it, Alexander Zverev and Andrey Rublev were also drawn to face each other for the first time on the senior tour in the first match—and on Monte-Carlo’s biggest stage, Court Rainier.

He added: “It’s nice to see how we both have grown really. I think that was just the first one of many.”

They had met three times on the ITF Juniors circuit in 2013, with Zverev winning twice. Then Zverev turned pro, and their trajectories to this meeting point had been rather different.

Rublev, ranked 148, the younger by six months, and still a relative newcomer to the senior tour, was here courtesy of a wild card. But in 2014, he was named ITF World Champion, won the Roland Garros junior title, and singles bronze and doubles silver at the Youth Olympic Games in Nanjing. He went on to win the ITF Junior Masters title last spring.

And although main-tour wins had yet to flow for the young Russian, he arrived in Monte-Carlo with a Challenger title to his name.

Zverev, however, had already taken great strides. The 6ft 6in German carried off the ATP’s Star of Tomorrow trophy last year, and seemed already entirely at ease with his burgeoning stardom.

This year, he reached the semi in Montpellier, beating Marin Cilic in the process. The next week he wowed the crowds in Rotterdam with victories over Vasek Pospisil and Gilles Simon to reach the quarters.

To Indian Wells and a career-best Masters run to the fourth round, where he blew a match point against Rafael Nadal with a wild volley, but he had already beaten Simon again, and Grigor Dimitrov. He had got used to rubbing shoulders with the stars, too, practising with Novak Djokovic this week, and a regular hitting partner for Roger Federer.

Zverev explained in Rotterdam this year: “[Roger] always takes me to practice…I don’t know why, to be honest! He’s been a big help, telling me how to act on court and what to do in the important moments.”

The winning, and those positive influences, were certainly in evidence against his friend/rival, an hour-long match dominated by the elder man. Zverev dropped just three points on his first serve, broke Rublev four times, and emerged a convincing winner in exactly an hour, 6-1, 6-3.

He has, too, a mature personality, at ease with the growing media demands, and fluent in three languages. So has he grown used to the attention?

“I think it’s always nice if people see you as a good tennis player, see what you can do maybe in the future. I’m happy that other players think that as well. That those guys take me for practice is really nice.”

Zverev next plays a man 16 years his elder, the No8 seed David Ferrer. This will, more than many recent matches, be a valuable yardstick, since Ferrer beat him in their only previous match two years ago in a 6-0, 6-1 drubbing on Hamburg’s clay—though Zverev did make the semis.

“It’s a great test for me. I think he’s one of the toughest competitors on clay, been playing great on clay his whole career, and he’s been a solid top-10 player for 10 years now. It’s going to be a great match. I’m looking forward to it.”

For Rublev, this opening match was perhaps his own useful yardstick. He has some catching up to do with his fellow junior, but in these early stages of a career, things can change very quickly. Zverev, like Coric last year, are proof of that.

As Coric said in Marrakech: “I’m very young and have a lot of space to learn and improve, but also I’ve been on the tour for many years, and I feel quite confident now.”

The last teenager to win an ATP title was Cilic in 2008: It may well be Coric or Zverev who becomes the next.