"It was a good tournament, a good match, exactly what I was hoping for and more, so I’m very happy" 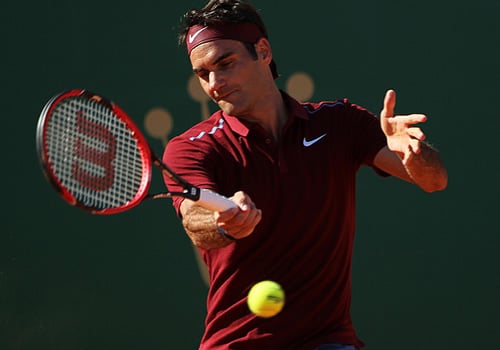 Roger Federer’s opening assessment of his quarter-final match on a baking day at the Monte Carlo Rolex Masters might have misled some who had not watched one of the most entertaining matches of the tournament.

“It was a good tournament, a good match, exactly what I was hoping for and more, so I’m very happy.”

Misleading, because Federer did not come out the winner of the fine two-hour-plus battle with old friend and adversary Jo-Wilfried Tsonga. But as most followers of tennis are only too aware, No3 seed Federer, the player with more Grand Slams and more weeks at No1 than any other man, was this week playing in his first tournament since undergoing knee surgery more than 10 weeks ago.

Thus far it had gone extremely well: Two tough opponents in No38-ranked Guillermo Garcia-Lopez and a first seed in the shape of Roberto Bautista Agut. The latter, seeded 14, had accumulated a 20-6 match record on the season and two titles, with wins over the likes of Marin Cilic, John Isner, and Tsonga himself.

But Federer did admit to some tiredness ahead of the second match: “I felt a bit tired. I can feel it in my body right now. I feel a bit soft, without energy. But as the match progressed, I felt better and better… But I had a quiet day yesterday, more than usual, just hit a few balls just to say I did something. But I didn’t want to take any risks.”

Playing here for the 13th time, Federer had reached the final four times before, but if he was to advance to the semi-finals this year, he knew he needed to be at the top of his game.

Tsonga, a charismatic Frenchman with all-court power and touch, had thwarted Federer before, notably in the final of the Toronto Masters in 2014 and on the clay of Roland Garros in 2013. He would pose a tough test of Federer’s fitness and stamina, especially as this was the first time the Swiss had to play back-to-back days.

Federer took the first set with relatively little trouble, though he did give up an early break advantage. Two more breaks ensured a swift 6-3 opener, though Tsonga was spraying rather more errors than he had done in beating his previous two opponents in straight sets.

But now warming to his task, Tsonga took advantage of a slip in the level of Federer’s serving in the second set to break straight away, and broke again for 4-1. Federer pulled one of the breaks back, but Tsonga was now firing on all cylinders, and broke again for 5-2. The Federer frustration was evident: A volley error and he tossed his racket aside in disgust, for sure enough, Tsonga served out the set after little more than an hour and a quarter’s play, 6-2.

If Federer was unsure how his body would stand up to back-to-back matches, he was presumably even more unsure how he would manage a three-setter, especially when the final set became such as physical battle.

For neither player could work a break point, Federer serving first, Tsonga staying strong and focused in reply. The Swiss, and much of the crowd, sensed a key moment as the Frenchman served at 4-5 and went 15-30 down, but a couple of rushed forehands from the Federer racket and the door was slammed shut.

Instead, it was Tsonga who produce a couple of superb passing shots against a net-chasing Federer to bring up the only break point of the set, and another winner did the trick. Tsonga served it out, 7-5, to advance to a meeting with fellow Frenchman, the equally charismatic Gael Monfils, who brushed aside his fourth opponent of the draw, Marcel Granollers, in another straight-sets win, 6-2, 6-4.

But by then, Federer was out of the building, though en route, he admitted he may do a little light practice tomorrow if he felt OK. For he was, he stressed, more than satisfied with how things had gone, albeit annoyed that he had been unable to seize his fleeting chances.

“Yes, I thought maybe after the first set I was going to win the match. I thought I was going to win maybe the beginning of the third. But that doesn’t matter really. It was a good match. It was nice to play an intense match. I’m happy how the body reacted. So many good things this week. It’s all positive for me.”

Federer will not play competitively during the next fortnight, and will postpone a decision on Madrid and Rome, the two big clay Masters that usher in the French Open, until closer to the dates. He is, rightly, taking it a day at a time: “Now I’m interested to see how I will feel tonight and tomorrow morning when I get up, how my body reacts, and the knee of course. Immediately we’ll decide whether I’ll practise tomorrow or not.”

He also admitted there are areas that still need time to bed down, such as his serve: “I need to be capable to play service games after service games.”

That, however, was trumped by the good news.

“On top of that, in the pressure situations—because you know you might not be as loose as in practice—so many good things this week. I trained really hard. My fitness coach was here. We practised well on the tennis court, as well. Yeah, it’s been a really good last couple of weeks for me, so I’m very happy.”

Federer has always had the capacity to see the ‘glass half full’ while remaining both level-headed and smart. So yes, compared with where he was 10 weeks ago, in a hospital bed and feeling “a little bit scared”, things have moved on remarkably fast and remarkably well. So he has, in truth, every right to feel both positive and happy.