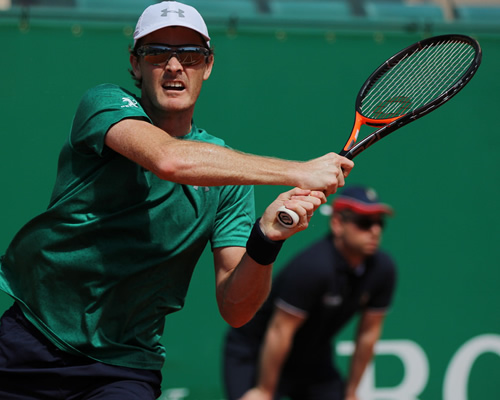 After winning his first Major men’s doubles title in Australia at the start of 2016 with Brazilian Bruno Soares, Jamie Murray’s growing reputation as one of the best doubles players on the tour was confirmed with the No1 ranking just a fortnight ago.

Now, having consolidated that top place this weekend with a run to the Monte-Carlo final, Murray was targeting a first Masters title.

For a doubles player of Murray’s stature, it may come as a surprise that the Briton who was a Wimbledon champion in mixed doubles at his first attempt in 2007, and with three Major men’s doubles finals under his belt, had reached only two Masters semi-finals in almost a decade on the tour.

However, a longer-established partnership with John Peers during the last two years seemed to develop Murray’s confidence, fitness and determination—as did some fine wins for Great Britain on the way to the Davis Cup title. Now teamed up with with Soares, a two-time doubles Masters champion, things have gone from strength to strength.

In Monte-Carlo, though, as No1 pair in the ATP rankings race, they were up against the hot team of the moment, the No2 duo who had just won two of the biggest Masters back-to-back, in Indian Wells and Miami.

The 34-year-old Nicolas Mahut, ranked 48 in singles and with three singles titles in the last three years, partnered a young Frenchman with equal amounts of all-court flair, Pierre-Hugues Herbert. Like Murray and Soares, they were reigning Grand Slam champions—at the US Open—and also finalists last year in Australia.

Soares summed up the task that the Frenchman posed: “They have no weaknesses. It’s tough. They’re all-around players. They do everything well. They can beat you so many different ways.”

After an hour’s delay for rain, the four took to court in damp and cool conditions and in the early stages, the British/Brazilian men were the more tightly knit. A great backhand lob from Murray gave them the edge in eighth game, but the French duo hit straight back, before a fine net exchange, closed by Murray, broke for the set, 6-4.

But now with the sun out and the home crowd behind them, the French gelled perfectly to take control of the second set, a 6-0 trouncing. The run of points continued, with 12 from 15 in a row, first going up 5-1, then Murray and Soares closing to 4-5, and again to 6-7.

So for Murray, the wait for a Masters title continues, but this was a popular victory for a very popular French duo, the first French winners here for 30 years. And they are surely becoming strong contenders for the Olympics in Rio this summer—though Murray and brother Andy may have something to say about that.