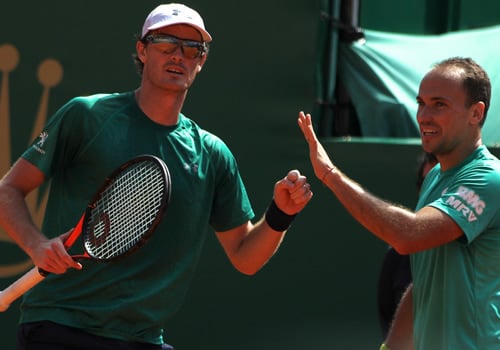 After just shy of two weeks as the world No1 doubles player in the world, Jamie Murray found his position at the top of the pile under threat as the sun rose on semi-final day at the Monte Carlo Rolex Masters.

It has been some year for the elder of the Murray brothers. After reaching just one doubles Grand Slam quarter-final in 10 years on the pro tour—in 2013 at the US Open—last summer he reached two finals at Wimbledon and New York and, with a change of partner from John Peers to Brazilian Bruno Soares, hit the jackpot with the Australian Open title this year.

And all that alongside teaming up with brother Andy to help GB to its first Davis Cup victory since 1936.

Now, though, he and Soares, the No4 seeds, faced Monte-Carlo’s No2 seeds and French Open champions Ivan Dodig and another Brazilian Marcelo Melo, and the outcome would determine next week’s doubles No1 spot. Melo trailed Murray by just 15 points in the rankings.

It was also a tricky match for Soares, who has actually played on the same side of the net as Melo this year and many times in the past. Melo was best man at his wedding, they grew up together in the same city, and always cheer for each other. But Soares added: “Better to meet in the semis than the final!”

“The toughest part is playing a good friend. It’s never easy for me to play against Marcelo, but we both know that can happen. So we’re just going to go on court, try and forget about that, and try to play our best tennis. The good thing is that it’s great for Brazil that we’re going to have someone in the finals!”

The Australian champions got off to a flying start with a love break to set off a 4-0 lead before Melo and Dodig got on the board, and held that advantage through to the set’s conclusion, a speedy 6-2.

The second set was considerably tighter, with some explosive points at the net from both teams. But the scoreboard stayed on level terms until 4-4. On break point, though, Murray made a great intercept on break point, and his team held serve on deuce to take the match, 6-4, after 67 minutes.

Murray, who had taken on-court treatment for an upper-leg injury in the quarters, confirmed that he was feeling fine, though had felt the pull during his serve. However plenty of physio would ensure he was more than ready for the final. As he said: “To get our name on that marble panel would be really cool!”

For this is Murray’s first Masters final, though his partner won back-to-back titles in Canada with former long-term partner Alexander Peya.

“I haven’t done particularly well in Masters, so to get to my first final is another stepping stone. You know from the first ball you’re going to have to play either the best doubles teams in the world or the best singles players. We’re excited to be in the final.”

Asked about whether he realised that the No1 ranking was up for grabs, he admitted: “I knew what the situation was, but if we didn’t win the match, it was not going to be the end of the world, I’d already got to No1.”

Murray and Soares will play either No3 seeds Pierre-Hugues Herbert and Nicolas Mahut, or the surprise Colombian duo who put out the Bryan brothers, Juan Sebastian Cabal and Robert Farah.

Herbert and Mahut are looking for their third straight Masters win after victories in Indian Wells and Miami, while Cabal and Farah, unseeded here, are playing for their first.