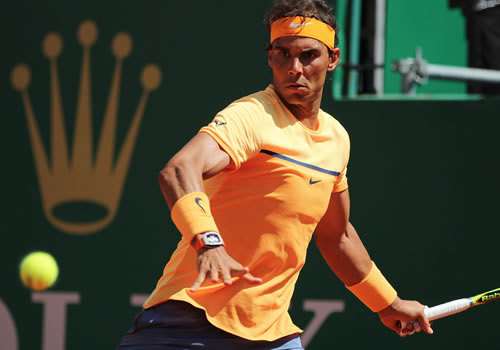 The defending champion, tennis’s No1, and arguably the favourite to win his third Masters of the year in Monte-Carlo, Novak Djokovic, may have retreated to his home down the road for some well-earned rest, but the quarter-finals still boasted the next best four players in the world.

Among those four were the two remaining champions at this picture-perfect tournament. And the luck of the draw had thrown Stan Wawrinka and Rafael Nadal into the same quarter and into each other’s path for the most striking match on a quarter-final Friday.

The No4 and No5 seeds had played each other 17 times, but until 2014, the greatest clay exponent of his age, Nadal, had won all 12 matches, including meetings both here and at Roland Garros. Since then, and as the later-maturing Swiss had grown in confidence and experience, the scene had taken on a rather different look.

His game for many years had been admired—a compelling mix of power and elegance, an attacking game of strength from the baseline and the net, and boasting perhaps the best single-handed backhand in the game.

He broke the top 10 back in 2008 but could not find the consistency, or perhaps self-belief, to maintain that level. However in 2013, the man whose fighting spirit is writ large on his arm—Samuel Beckett’s “Ever tried. Ever failed. No matter. Try again. Fail again. Fail better”—played one of the matches of his career in Melbourne to take defending champion Djokovic to 10-12 in the final set of their fourth-round match.

Then last year, he was for the first time a presence in the quarters of all four Grand Slams, making the semis in Australia and New York, and winning the French Open with a jaw-dropping display of shot-making tennis over Djokovic. He also beat Nadal on Rome’s clay and again at the Paris Masters.

Already this year Wawrinka had two titles behind him, and dismissed a quality opponent in Gilles Simon for the loss of just three games yesterday.

For all Nadal’s relative struggles over the last year, however—and he arrived in Monte-Carlo without a title since Hamburg last summer, with losses to Pablo Cuevas and Fernando Verdasco to his name, and on a 13-6 run so far this season—he was an eight-time champion with a 55-4 record in this tournament.

Nadal, who has the best clay-court match winning percentage in the Open era—now 350 wins—and has compiled seven Rome Masters, eight Barcelona 500s, and a remarkable nine French Opens, also commented after beating Dominic Thiem in a testing last-16 match here: “That was a great continuation against a very tough player. Was a very good victory for me… Yes, it was my best match on clay this year.”

Both, then, were in great form, great shape and ready to produce their best in one of their favourite venues—except that, just as fast as Wawrinka had hit his best against Philipp Kohlschreiber and Simon, he lost that same form in an error-strewn performance, particularly in the opening set, and Nadal was ready to take full advantage.

In the opening half hour, Wawrinka would win only seven points on his serve, suffer his first break in the fourth game, and at his 10th unforced error of the set, 1-4 down, broke his racket across his leg in disgust.

Apparently distracted by the noise of the lunching crowds above the court, Wawrinka gave up another break and Nadal, now bristling with purpose, made 13 from 16 first serves and sealed the set, 6-1.

At the start of the second, Wawrinka seemed to find more resistance, but Nadal, whose infamous forehand had been rather less than reliable in recent months, was plying his looping cross-court drive to the sidelines to draw more errors from his opponent. When Wawrinka came to the net, more often than not Nadal produced a pass, much to the delight of the crowd, and he broke the Swiss in the fifth game.

Then came one of the lapses that have plagued Nadal at times in recent matches, and Wawrinka broke straight back to love: Was this the start of a comeback?

Alas for the neutrals, it was not. Even when let off the hook at 3-3 15-40 down by three straight errors from Nadal, Wawrinka seemed unable to grasp the advantage. A double fault put him 0-30 down, a wide forehand brought up three break points, and another woeful wide forehand from the Swiss delivered the key break.

Nadal, wavered briefly with a couple of errors on match point, but at last sealed his important win, and with a pleasing seven from seven points at the net, and more winners to errors. Wawrinka? Well 29 errors to 14 winners told the story.

Nadal, as always, talked of progress and improvement rather than total satisfaction: “The important thing is play points in a row with the right intensity, with not many mistakes. Something we are working hard on. I think I was able to do it well yesterday and today. That gives me confidence, no?

“When that happens, I can hit some winners, too, with my forehand. I did today. I hit some good passing shots. I defended some good balls. That’s important for my confidence and for my game.

“Then if I am able to play with no mistakes, then you get confident, you can play longer, you go more for the shots. Is little bit step by step every day and every moment.”

Nadal next plays Andy Murray, who he beat at the same semi-final stage twice before, and the Spaniard leads their overall head-to-head 16-6. However, Murray won their last clay-court meeting in the Madrid final last year.

Nadal admitted: “He played a great match today. I need to be ready to play the way I am playing the past two matches. If I am able to do it, I hope to have my chances.”

Murray took a very similar view: “If I play like I did today, I’ll have a chance.”