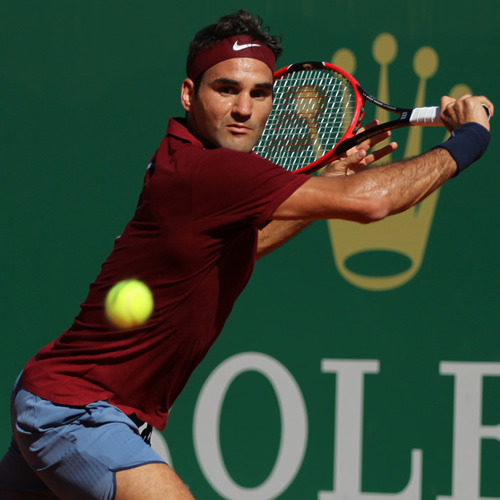 Roger Federer is through to round three in Monte Carlo Photo: Marianne Bevis

It was the kind of day to could turn fans of tennis dizzy, so many and so good were the matches on offer against the idyllic backdrop of the Mediterranean.

One of the most highly anticipated matches of the Monte-Carlo Rolex Masters featured not a former champion—all three of those, Novak Djokovic, Rafael Nadal and Stan Wawrinka would jostle for attention on a star-studded Wednesday. The focus of considerable attention was instead the No3 seed, Roger Federer.

The Swiss has always commanded a huge following, but at the age of 34, his popularity seems only to grow as he enters the autumn of a record-setting career. Now, however, there was an extra buzz, for Federer was about to play his first match in 10 weeks after undergoing surgery for the first time in his career.

The upside of his withdrawal from four scheduled tournaments was that he had been able to spend time acclimatising to Monte-Carlo’s clay: The down side was that his match sharpness was untested. As he put it: “I think now there’s more rust than rest—but I am rested.”

The extra frisson in this part of the world is that, despite reaching four finals in the Principality, and despite a strong clay resume, Federer has never won this title.

He has also reached the Rome final four times, has won the Hamburg/Madrid Masters six times from eight finals, and won Roland Garros once from finals. Indeed he has, during almost 18 years on the pro tour, stacked up an impressive 80 percent match-winning rate.

This time in Monte-Carlo, though, there was something else at stake: How was his form after knee surgery? And the first test came against a fellow exponent of the single-handed backhand and fellow 30-something, Guillermo Garcia-Lopez.

The 32-year-old Spaniard, ranked No38, was no slouch on clay, either. Three of his five titles had come on the red stuff, most recently Bucharest last year. However, in three previous meetings, he had made very little headway against Federer—not won a set, not even reached a tie-break.

Surprisingly for two men with as many miles on the clock as Federer and Garcia-Lopez, though, they had not faced one another since Wimbledon 2009. As long as Federer was fit, he should have little trouble.

The third seed’s entrance to the famous MCCC centre court was cheered to the cliffs that tower over the Club. He had been away for well over two months, but he had also fallen earlier than expected here last year, in his second match and in straights sets to Gael Monfils.

In the early stages this year, the stylish tennis of the Spaniard held its own against that of Federer—indeed Garcia-Lopez was the first to get a love hold.

But Federer, returning to the tour with his now-familiar attacking brand of tennis, serve and volleyed on his own side, came in on the Spaniard’s second serve wherever possible, and quickly got a break. He served out the set, 6-3, in half an hour.

The second set was a similar story, and the match looked set to conclude in a scant hour of full-on attacking play. But serving at 5-2, the Spaniard got an unexpected break back to love, and held for 4-5. Federer did not blink this time: He served out the win in an hour and a quarter, 6-4.

It goes without saying that the question he faced was knee related—and it was all positive.

“The knee felt really good, like in practice. Felt like I didn’t have to worry about it. I could just go freely. I think I’m at a point now where I’m looking more forward, in the sense that whenever I can dig out a good point, I had good movement, I just kind of went for the drop-shot without having second thoughts. It’s only building on my confidence now, which is great.”

“It’s been like that for at least a week now. Yeah, I was very pleased how I felt, even how I played… In a way it was a perfect match.

“I was excited and tense in the beginning just because it’s a first round, it’s my first match back. So it was nice to go through all these emotions.”

Then he added, in French: “I’m totally reassured.”

He next plays either the resilient Roberto Bautista Agut, seeded 14 but, like Garcia-Lopez, never able to win a set from Federer, or a man who has given the Swiss some trouble before. Jeremy Chardy was on the losing end of Federer here last year but he beat the Swiss in Rome in 2014 in a final-set tie-breaker.

Further down the line, a quarter-final could pose one of two more Frenchman who have beaten Federer on clay, either No9 seed Richard Gasquet or No8 seed Jo-Wilfried Tsonga. And all that before a possible showdown with the ultimate test of his knee, Djokovic.

The two men who raced here from the Marrakech final just days ago both showed some weariness in their opening rounds. The teenage Borna Coric was already practising at the Club yesterday but the classy tennis of Philipp Kohlschreiber proved to be too good, 6-4, 6-4. The German will next play 2014 champion Wawrinka.

The champion in Morocco, Federico Delbonis, lost to Fernando Verdasco, 6-0, 6-3, who will next play one of the form men of the season, David Goffin, who is seeded close a career-high No11. The nimble Belgian got the better of a man almost a decade his senior, Feliciano Lopez, 7-5, 6-0.