Gilles Simon, Richard Gasquet and Gael Monfils are among the Frenchmen to have won their openers at the Monte Carlo Masters 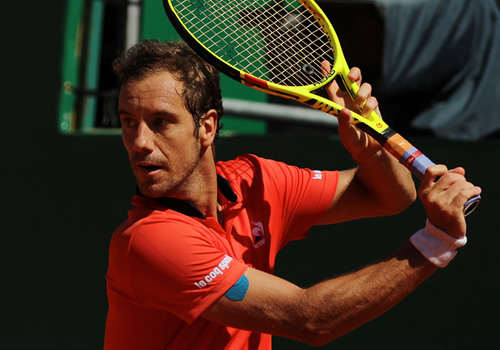 Not for the first time, and probably not the last, there is a Spanish armada of players kicking up dust and a storm at the first clay Masters of the year.

No fewer than 11 players are spearheaded by arguably the best clay-court exponent of the modern era, Rafael Nadal, and although he is seeded No5 here, he remains one of the key contenders for the title.

For Nadal’s record on the red stuff speaks volumes for the man who has returned from more knock-backs than most, including the tail-end of 2014 when he finished his year with both injury and appendicitis.

But while his return to the top, even on his beloved clay, has been arduous, and his confidence knocked many times via first-time losses to unexpected opponents such as Nicolas Almagro and Fabio Fognini, his records remain formidable: nine French Open titles, seven Rome crowns and eight in Barcelona for a start. He has 47 titles on clay—and the next active players, Almagro and David Ferrer, have just 12 apiece.

And here in Monte-Carlo, the story is just as extraordinary. He won every year from 2005 to 2012, has a 53-4 career record, and put together a 46-match winning streak on the MCCC’s elegant courts.

Yet this year, Nadal is not the one to beat: That honour belongs to defending champion and world No1, Novak Djokovic. Nadal admitted:
“He’s going to be the favourite for every tournament until somebody shows something different. He’s the player of the moment without a doubt. Everyone sees him as the winner.”

So are there other Spaniards who could carry the red and gold flag this week? The most decorated, Ferrer, is likely to be the first to try his luck. The No7 seed is lined up to face Djokovic in the quarters—but for the first time since 2008, Ferrer arrives in Monte-Carlo without a clay title under his belt.

The 34-year-old is in the same segment as two more veteran Spaniards, the 23-ranked Feliciano Lopez and 88-ranked Fernando Verdasco. The former’s claim to fame this year is the solitary victory over Djokovic in Dubai—but it was via retirement from the Serb with an eye infection. As for Verdasco, his form is a shadow compared with 2010 when he beat Djokovic both here and in Rome.

Indeed the only other Spanish seed in the draw aside from Nadal and Ferrer is Roberto Bautista Agut, No14, and lined up in Federer’s quarter—though another over-30 Spaniard, Guillermo Garcia-Lopez, will get a tilt at the Swiss first.

Among the 11, then, there seem few Spaniards who might rattle the cage of the top four seeds aside from Nadal.

So maybe it will be another armada, a French one, which sails through the draw.

For there are also 11 Frenchmen among the 56—and this particular fleet boasts strength and depth, has experience alongside promising fresh blood. Five of the 16 seeds are French, and by the time the first round had played out, all were safely into the second phase. The No8 seed Jo-Wilfried Tsonga had a direct bye, but the other four played and won.

Both No9 seed Richard Gasquet and No13 Gael Monfils beat their opponents in straight sets, both with a 6-0 second, and each in little more than an hour—much to the delight of the local French-speaking fans.

As it happens, both men have, in the past, also scored significant upsets over Federer at this very tournament.

Monfils ended the Swiss star’s campaign here last year, though this time around, he is likely to have to beat Djokovic in the quarters first. As for Gasquet, few will forget the 19-year-old’s comeback victory, 7-6(8) in the third, in his very first match against Federer. Gasquet would go on to do the same in Rome in 2011 with a near identical score, and he could play Federer in the quarters later this week.

That is always supposing Tsonga does not beat Gasquet, and the charismatic Frenchman has also had some famous wins over Federer, on the clay of the French Open in 2013 for one and, more recently, on the hard courts of Toronto in the 2014 title match—the same year he came close to beating Federer here in Monte-Carlo.

Yet in this same Tsonga/Gasquet segment are no fewer than three more Frenchman. The youngest of them, talented 22-year-old Lucas Pouille, playing here with a wild card, beat compatriot Nicolas Mahut, a man more than a decade his elder. Pouille now plays another all-French contest against Gasquet.

The No16 seed Benoit Paire enjoyed perhaps the noisiest and longest match of the day, saving a match point against Spaniard Inigo Cervantes, 4-6, 6-2, 7-6(6). In the same quarter, 25-year-old qualifier Pierre-Hugues Herbert put out Guido Pella in impressive 6-3, 6-4 style. His prize, however, is the No2 seed, Andy Murray.

So three of the quarters were today guaranteed a French presence in the second round, and yesterday, No15 seed Gilles Simon ensured there was a French threat in the fourth quarter, too.

He beat a not inconsiderable opponent in Viktor Troicki, 6-3, 6-4, though was forced to save six break points in a tough hour and three-quarters to close the deal. Simon, however, finds himself in one of the toughest sections of the draw. After one top-30 player in Troicki he has another, the former top-10 Grigor Dimitrov. And all that before he contemplates a third round against the French Open champion Stan Wawrinka, and a quarter-final against Nadal.

But the wiry 31-year-old Frenchman is always dangerous, and pressed Nadal to the three-set limit in their last clay encounter in Rome 2014. He then led Wawrinka by two sets to one in a gripping third round five-setter at Roland Garros, but the Swiss survived, and the rest was history.

Elsewhere, No10 seed Milos Raonic beat Italian wild card Marco Cecchinato, 6-3, 7-5. The Canadian arrived here from the final in Indian Wells and the quarters in Miami but, contrary to what his big-serving game suggests, he has been a quarter-finalist in Monaco the last two years and a semi-finalist in Rome in 2014.

Also on a hot streak is Dominic Thiem, winner in Buenos Aires, beating Nadal in the semis, and in Acapulco. The No12 seed struggled to come through a 1-6, 6-3, 6-4 victory over qualifier Jan-Lennard Struff.

British hopes were boosted by Aljaz Bedene, who scored an easy win over Lukas Rosol, 6-2, 6-3. Now, however, he faces Nadal.