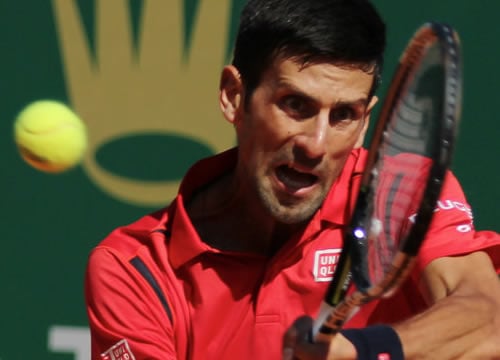 Novak Djokovic is out of the Monte Carlo Masters Photo: Marianne Bevis

As shocks go, what happened on Prince Rainier court in the perfect late-afternoon sunshine at the most glamorous tennis venue on the tour was right up there.

Defending champion Novak Djokovic came into his home tournament—he lives just down the road from the MCCC—as hot a favourite as Rafael Nadal had been during his eight-year reign at the Monte Carlo Rolex Masters. It was Djokovic who halted the Spaniard’s 46-match winning run here in the 2013 final, and the mighty Serb went on to win again last year, as he won almost every other tournament he touched.

So far ahead of the field had Djokovic been since the start of last year that he has more than twice the points of world No2 Andy Murray. He arrived here having overtaken Nadal to top the list of Masters title, winning Indian Wells and Miami back to back, and that after claiming a sixth Australian Open title.

Indeed since the start of last year, he had reached the final of 19 of his 21 tournaments and won 15 of them. That’s a 110-7 match run, with a 40-5 record over top-10 opposition. His only loss in 29 matches this year was down to an eye infection in Dubai.

And there was no doubting he could be just as devastating on clay. Along with his two titles here, he had won four titles from six finals in Rome and beat Nadal on his way to the Madrid title in 2011.

He was, in short, expected to sail at least as far as the semi-finals, where he could face a Roger Federer returning to his first tournament since January—especially as his potential quarter-final seed, David Ferrer, was replaced in the draw by Lucky Loser Marcel Granollers

But all that had reckoned without the towering 22-year-old Czech Jiri Vesely.

In fairness, the young left-hander was one of the young group tipped to rise up the rankings after winning the Junior Australian Open in singles and doubles, and then reaching the final of the US Open singles and Wimbledon doubles, all in 2011. He went on to earn the ATP’s Star of Tomorrow Award in 2013.

Last year, he rose to 35 in the rankings after claiming a first title in Auckland and then reached the final on Bucharest’s clay, but until April this year, he had won just one match in eight, before putting together a good semi run in Marrakech last weekend.

He brought that same clay form with him to take a two hour 20 minute win over Teymuraz Gabashvili from a set and a break down in the first round, and he carried on where he left off in the first set against Djokovic. The young player has a huge serve and a superb drop-shot, and stayed with an under-performing Djokovic through to 4-4. Vesely then worked two break points and the world No1 struck a forehand long to concede the vital advantage. The Czech served out the set, 6-4.

It did not take long for Djokovic to lift his focus and level, though, and he raced through the second set to take advantage of a Vesely who seemed increasingly gripped by nerves. From 2-2, the champion reeled off four straight games, 6-2, and in truth, most observers anticipated a similar pattern in the third.

But Vesely took a comfort break, during which he afterwards admitted that he had given himself a good talking to: “I really had to get focused again because I completely lost concentration. Novak just stopped missing, and I did a lot of easy mistakes. I was like, OK, now, you really have to go on and work again for every single ball because otherwise it’s going to end up bad for me.” 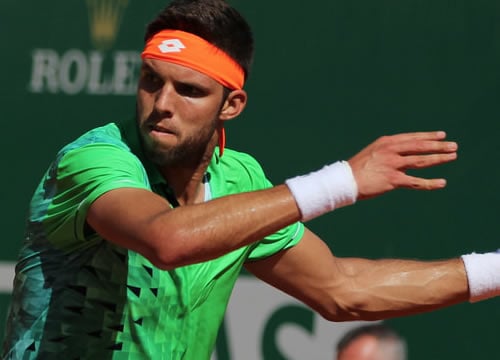 Jiri Vesely is the world No55 Photo: Marianne Bevis

It worked, and he got a break in the first game, only for Djokovic to break back courtesy of a shocking smash into the net by the Czech.

The Serb again looked more fragile than usual, double faulting to bring up break point in the third game and he hit a forehand long to hand back the advantage. Vesely had regained his touch, too, and pulled off a superb drop shot in holding for 3-1, and then aced to hold for 4-2. He almost broke once more in the ninth game but would instead serve it out, claiming his first ever top-10 win as Djokovic hit his 34th unforced error of the match.

So impregnable has Djokovic been that this was his earliest defeat on the tour in three years, since losing in the second round of the Madrid Masters against Grigor Dimitrov, and he had not lost a tournament—aside from his retirement in Dubai—since defeat to Federer in Cincinnati last August.

He was quick to credit his opponent, and embraced him warmly at the net, but was far from satisfied with his performance.

“Obviously it’s not easy to lose the match in terms of accepting it right after exiting the court. But I have to congratulate my opponent. I think he played very solid. He was serving very big. He was playing tactically good and aggressive. On the other hand, for me, there were just very few things I could take out from today’s match as a positive. I was playing really, really bad.

“But he deserved to win. When he was a break up in the third set, he was playing bravely, coming in, drop-shots, big serves. He was going for it. He deserved to have it.”

After such an intense season this year and last, Djokovic certainly looked and sounded jaded—perhaps not surprising. As he concluded:

“Eventually this was going to happen. Everything happens for a reason. I’m going to get some more time off now… I’m going to need some rest, physical and mental. It’s been a tough four or five months. I need time to kind of recharge.”

By the time Vesely came to a full press room almost an hour later, he was still in state of semi-shock: “Well, to be honest, I can’t think much about it. Still completely out of thoughts of what happened out there. I’m just very, very happy. It’s something amazing actually. When I went on court, I had completely different thinking, like I hope to win a game or I really hope to do well. But I really had no idea that I really would be able to beat Novak today.”

Vesely will tomorrow face No13 seed Gael Monfils, who beat Paolo Lorenzi 6-2, 6-4. As it happens, before Vesely knew his fate, he picked a victory over Monfils as the previous highlight of his career: It was a second-round win in five sets, three of them tie-breakers.

If their second meeting is as good as that one, the Monte-Carlo crowd will have something to celebrate.