Rafael Nadal is through to the quarter-finals of the Monte Carlo Masters, where he will face Stan Wawrinka 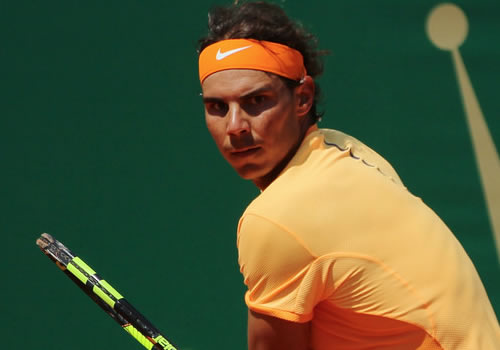 One of the most highly anticipated match-ups as the last 16 men battled for a place in the Monte Carlo Rolex Masters quarter-finals placed one of the most decorated clay players in the No5-seeded Rafael Nadal against one of the brightest young prospects, No12 seed Dominic Thiem.

The reason for such anticipation, though, was down to their last meeting, which took place just two months ago in Buenos Aires. Thiem beat defending champion Nadal, having saved match point, in a tie-break third set and went on to claim the title himself. The 22-year-old went from there to Rio and beat David Ferrer on his way to the semis, and followed that with a run to the Acapulco 500 title.

All in all, it brought Thiem’s clay court titles to four from five finals in the space of a year, and he entered this toughest of assignments with the second best record this season—after Novak Djokovic—on 26-6 but even more impressive, 10-1 on clay. However, on top of all those matches, Thiem had survived two huge battles here already, two three-setters won from a set down, and endured an ulcer on this foot into the bargain.

Thiem has talked this season of the long training block over the winter that got him onto this rising trajectory, and the Austrian arrived in a stronger, leaner version of his 2015 self, but against the resilience of Nadal, he would need to draw very deep from his resources.

For all Nadal’s relative struggles over the last year, however—and he arrived in Monte-Carlo without a title since Hamburg last summer and on a 13-6 run so far this season—here was an eight-time champion with a 54-4 record in this tournament. He was a man with seven Rome Masters, eight Barcelona 500s, and a remarkable nine French Opens, and in his only other meeting with Thiem, at Roland Garros, he scored an easy straight-sets win.

It was quickly clear that the aggressive all-court game of Thiem was going to trouble Nadal again, not least via his Wawrinka-like backhand that has such pace and penetration through the court.

The Austrian broke Nadal at the fourth attempt and held for a 3-1 lead, but then faced a long tussle in the sixth game. Nadal broke back and then survived four more break points to hold for 4-3.

This would become a recurring and frustrating pattern for Thiem, who had faced a similar quandary against Djokovic in Miami a fortnight ago: From 15 break chances he was able to convert only one and came out the straight-sets loser.

In a 16-minute ninth game, Nadal was again on the ropes, surviving six break points and six deuces. After a Thiem hold, two more break chances came and went, though the Austrian had the crowd on its feet with a magnificent cross-court backhand pass.

But Nadal held, and now it was his turn to put on the pressure. Thiem double faulted to open, struck a couple of weary forehands out, and then on the second break point, he double faulted again. Nadal, against the odds, took the first set, 7-5 after an hour and 20mins, and Thiem had already broken his Djokovic break-points record: one point taken from 16 chances.

In the second set, Thiem again opened strongly, and his angled plays to the right and left kept Nadal under pressure. He broke to love in the third game, only to be broken back straight away, and Nadal now look the fresher and more animated of the two.

He broke Thiem again in eighth game and served out the win, 6-4. But if the number of break points won and lost did not demonstrate how close a match this had been, the two hours plus on the clock did.

Nadal seemed to have relished the test, and admitted it was probably his best clay match so far this year:

“I think I played a good match. In terms of level of tennis, was great I think. In terms of fighting spirit and attitude and being ready to accept the mistakes, the good points, the tough moments, was similar way that I played in Indian Wells.

“That was a great continuation against a very tough player. I think he played a great match, too. Was a very good victory for me… Yes, it was my best match on clay this year.”

Things certainly don’t get any easier for the former champion in what is a tough quarter of the draw. His quarter-final opponent will be French Open champion Stan Wawrinka, who also won the title here in 2014.

The No4 seeded Swiss took just 82 minutes to beat No15 seed Gilles Simon, 6-1, 6-2, and he too felt it was one of his best performances in a while:

“On my side it was an excellent match, a lot better than yesterday. From the start I was very strict with myself. I had to keep my tactics, be patient, attack him whenever I had the opportunity.

“I played very well today: My concentration was very good. This is important against Gilles. From the start I needed to dominate and be very present on the court. I succeeded in doing that.”

Nadal has a 14-3 record against Wawrinka, but it was the Swiss who won their last meeting in Rome last year.

Another big name coming into form in Monte-Carlo is Roger Federer, four times a finalist here, and back in competition for the first time since the Australian Open and knee surgery.

The early stages of the draw were tricky, with the No38-ranked Guillermo Garcia- Lopez as an opener and a first seed in the shape of Roberto Bautista Agut. The latter, seeded 14, had accumulated a 20-6 match record on the season—third after Djokovic and Thiem—and two titles, scoring wins over Marin Cilic, Jo-Wilfried Tsonga and John Isner. However he had failed to win a single set against Federer in four meetings, and this proved much the same.

Two breaks in the first set gave Federer a swift lead, 6-2. The Swiss had to fight off a 0-40 threat in the early stages of the second set, but he did so, and needed just one break of his own to advance to the quarter-finals, 6-4, in 68 minutes, and with 29 winners to his name.

Federer admitted to some tiredness coming into the second match since his 10-week hiatus:

“I felt as good as in the first match, or maybe not as good, because I felt a bit tired. I can feel it in my body right now. I feel a bit soft, without energy. But as the match progressed, I felt better and better.

“I’m happy with what I did. He’s a good player. I had a quiet day yesterday, more than usual, just hit a few balls just to say I did something. But I didn’t want to take any risks.”

Playing here for the 13th time, this marked Federer’s 30th win in Monte-Carlo, but if he is to score a 31st, he will have to play an old adversary and friend, Tsonga.

The Frenchman has thwarted Federer before, notably in the final of the Toronto Masters in 2014 and on the clay of Roland Garros in 2013. It will be tough test of Federer’s fitness, especially with no day’s recuperation first.