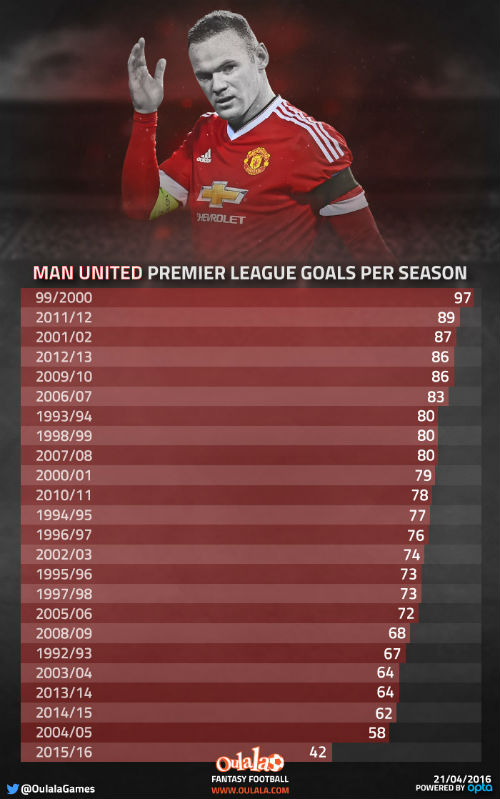 Manchester United are on course for their lowest ever goal tally in the Premier League this season.

Louis van Gaal is coming under pressure amid reports that the 20-time English champions could appoint axed Chelsea boss Jose Mourinho as the Dutchman’s successor at the end of the season.

The Red Devils moved to within a point of fourth-placed Manchester City this week thanks to narrow victories over Aston Villa and Crystal Palace at Old Trafford.

However, their back-to-back wins hasn’t been sufficient to significantly improve their goal difference, and the Oulala infographic above shows that United are on course for a record season.

Sir Alex Ferguson’s 2004/05 squad finished with 58 goals in 38 Premier League games as United ended the season without any silverware.

The Scot’s most-attacking United side contained the likes of Dwight Yorke, David Beckham, Paul Scholes and Andy Cole as Ferguson’s side scored 97 goals to retain their Premier League crown in 1999.

But Van Gaal’s current crop have only managed 42 goals in 34 top-flight games, although the United manager will surely point to Wayne Rooney’s injury-hit season as a contributory factor.

Five key areas where Liverpool have improved under Jurgen Klopp