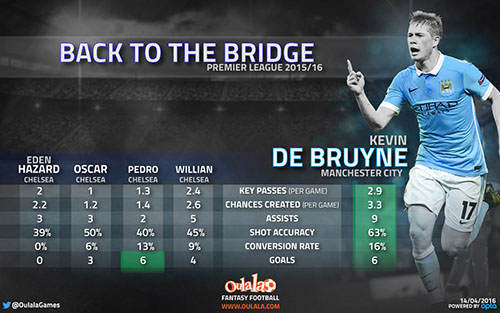 The 24-year-old moved to City in a £51m deal from Wolfsburg last summer just 12 months after he swapped Chelsea for the Bundesliga side after being deemed surplus to requirements by Jose Mourinho.

However, Oulala’s infographic suggests Chelsea and Mourinho were wrong to sell the Belgian starlet after De Bruyne’s impressive performances for Manuel Pellegrini’s side in his first season at the Etihad Stadium ahead of their trip to Stamford Bridge this weekend.

The Belgium playmaker has averaged 2.9 key passes per game, which is comfortably more than Willian, who has been the best passer of the Chelsea quartet.

De Bruyne also beats the Brazilian in terms of chances created per game – 3.3 to 2.6.

The big-money City signing has made more assists than Hazard, Oscar and Pedro combined after creating nine goals for his Citizens team-mates this season. Again, only Willian comes close with five assists.

De Bruyne also has a superior shot accuracy and conversion rate. Going by Oulala’s stats, Mourinho got the decision to sell De Bruyne badly wrong ahead of City’s trip to Stamford Bridge on Saturday.