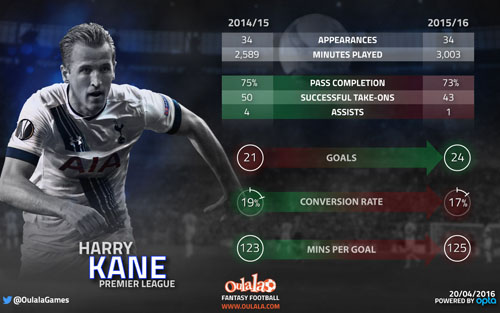 Harry Kane’s 2015/16 performances have emphatically dismissed any suggestion that the Tottenham Hotspur striker is a one-season wonder.

The England international failed to score in Tottenham’s opening six Premier League games of the season which prompted some to criticise the 22-year-old striker.

However, Kane has since netted 24 times in 28 Premier League games to fire the north London side to the cusp of glory.

Although Kane has been nominated for the PFA player of the year award, these Oulala stats show the Tottenham talisman hasn’t matched his 2014/15 heroics.

Kane has matched his 34 appearances from last term, while he has actually played 414 top-flight minutes more than the previous campaign.

However, while Kane’s scored three more goals so far this season, his conversion rate is down to 17 per cent from 19 per cent.

Kane is also trailing his 2014/15 effort in terms of minutes per goal, scoring every 125 minutes in Tottenham’s title challenge.

Kane has only made one assist in the current campaign, while he created four assists for team-mates in his first season under Mauricio Pochettino.

Kane’s pass completion has dropped to 75 per cent, too, while he has only managed 43 successful take-ons, which is three less than last season.

However, Kane does have four Premier League games to improve his 2015/16 margins.