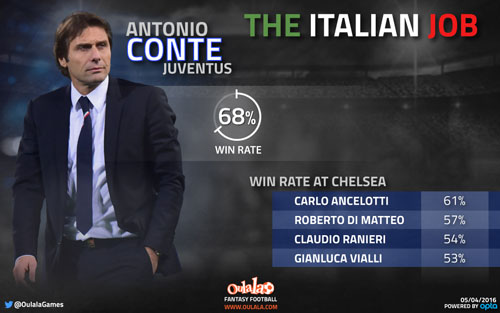 The Italy head coach will take over the reins of the defending Premier League champions this summer after the European championship in France.

Conte will follow in the footsteps of some other Italian legends in taking charge of the west London side.

Gianluca Vialli managed Chelsea between 1996 and 1999, winning the FA Cup, the League Cup and the Uefa Cup Winners’s Cup during his spell in charge.

The above Oulala infographic shows that the former Juventus star finished with a win rate of 53 per cent.

Leicester City manager Claudio Ranieri was famously axed in favour of Jose Mourinho in 2004 despite finishing with a win percentage of 54 per cent. The Foxes head coach could have the last laugh if his side dethrone Chelsea as champions this term.

Carlo Ancelotti swapped AC Milan for Chelsea and won the double in 2010 as well as an FA Cup in his first season before he left in 2011.

Roberto Di Matteo perhaps achieved the greatest feat of the Italian quartet after he guided Chelsea to their first-ever Champions League crown in 2012.

Having won three Serie A titles and two Coppa Italias during his time in charge of Juventus, can Conte match his 68 per cent win rate at Stamford Bridge?

Chris Sutton predicts where Arsenal will finish this season