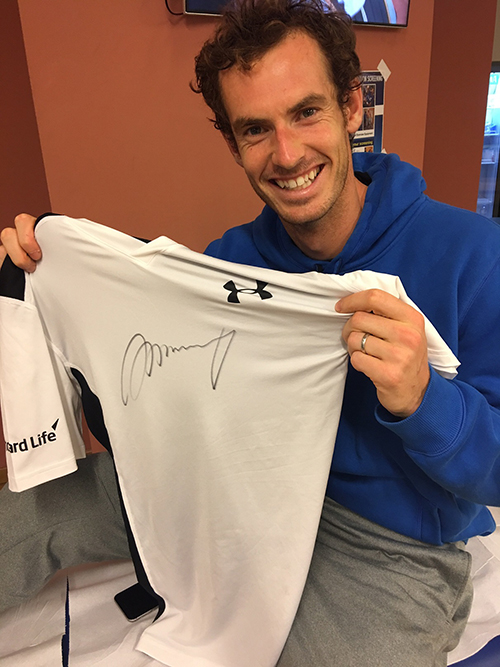 The day after Andy Murray became the first British man since 1931 to win one of the most prestigious clay titles in the tennis calendar, the Italian Open, the Briton has donated the shirt he wore in the final to a special appeal: CharityStars’ “Friends of Sean”.

Murray, who beat world No1 and defending Rome Masters champion Novak Djokovic at the famous Foro Italico, signed his winning shirt before donating it to auction in aid of a campaign set up to support Sean Hadfield and other people in his condition.

The 24-year-old Hadfield suffered an irreversible spinal cord injury in a car accident at the age nine, leaving him completely immobile and in need of permanent support from a ventilation machine. The aim of the charity is to offer such people the best quality care, but “Friends of Sean” is also committed to giving a quota of its funds to the Hospital Nacional de Paraplejicos de Toledo.

Murray, who arrives in Paris this week as No2 seed at the French Open for the first time, has enjoyed a fine clay run through the three Masters that usher in the biggest clay title of them all at Roland Garros. He reached the semis of Monte-Carlo, beat Rafael Nadal to reach the final in Madrid, and beat Djokovic on clay for the first time to lift his first Rome trophy.

But while Murray may have notched up numerous clay ‘firsts’ over the last year, this latest charitable donation is far from being his first: It is no accident that he has won the ATP’s coveted Arthur Ashe Humanitarian Award for his many fund-raising efforts.

He has organised charity matches in aid of the Royal Marsden after friend Ross Hutchins was diagnosed with Hodgkin’s lymphoma and Elena Baltacha died of liver cancer.

He set himself up in “Andy Murray: The Movie”, a comic sketch during Channel 4’s “Stand Up To Cancer” campaign, and has raised awareness for the work of Unicef, the World Wildlife Fund, and Malaria No More.

Just before the Davis Cup final last November, he wrote a moving piece about cancer for The Players’ Tribune entitled The Good Ones. It opens:

“I’m 28. Twenty-eight feels… young. When I was little, of course, it didn’t feel that way. Back then? Twenty-eight seemed old. But now that I’m here, I know. 28 is… it’s barely anything. It’s no time at all. My best friend, Ross Hutchins, got cancer at 28…”

And throughout his Davis Cup campaign, right to the end of 2015, Murray and his sponsors Under Armour and Standard Life donated to Unicef’s campaign to support displaced Syrian children for every ace he served. That fund has now exceeded £83,000.

CharityStars’ byline is “Live a dream, make a change”. To help make a change, bid for Murray’s special signed shirt. The auction closes on 27 May.