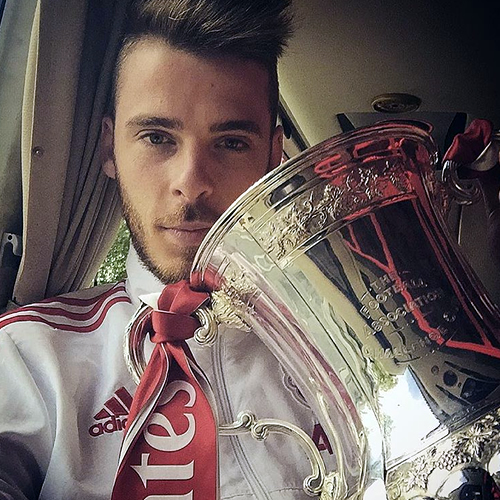 David De Gea was all smiles as he posed for a picture with the FA Cup on Sunday after helping Manchester United beat Crystal Palace in Saturday’s final.

The Red Devils needed extra-time at Wembley as they came from a goal down to beat the Eagles 2-1 and secure their first trophy since Sir Alex Ferguson’s retirement back in 2013.

De Gea has played a vital role in United’s success this season and has been a regular fixture between the posts for Louis van Gaal’s men.

And the Spain goalkeeper looked to be thrilled as he posed for a snap with his new trophy on the coach back to Manchester.

De Gea posted the picture above on his personal Instagram account on Sunday afternoon and wrote: “You’re finally mine!! I’m taking you home! @manchesterunited #WeAreUnited”

United ended up missing out on a spot in next season’s Champions League after they were forced to settle for a fifth-placed finish in the Premier League behind Manchester City.