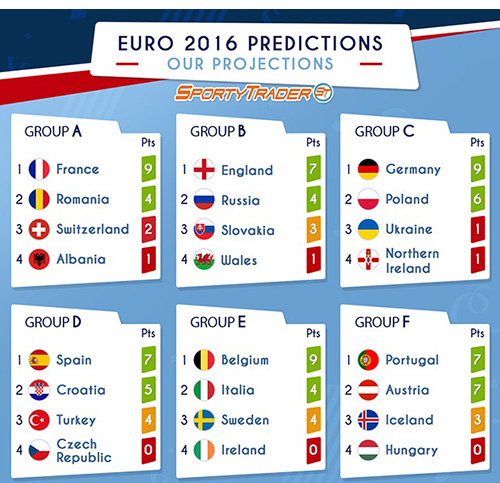 Roy Hodgson’s England side warmed up for Euro 2016 with a 2-1 victory over Australia at the weekend but France will still come out on top in the European championship final against the Three Lions, according to Sporty Trader.

The tournament is nearly upon us with Les Bleus set to get their campaign under way against Romania on 12 June. The French are heavily fancied to win Group A and underline their status as pre-tournament favourites.

England have a tough proposition in Group B against derby rivals Wales, as well as tricky Russia and Slovakia teams. Roy Hodgson’s side will be desperate to avoid an upset in their first game against the Russians.

Turning to Group C, Germany will also face their neighbours as Poland appear to be one of the tournament’s dark horses. It should be a straight shootout between those two for top spot with Ukraine and Northern Ireland completing the group’s line-up.

Spain will have to face Croatia, Turkey and Czech Republic in Group D as Vincente Del Bosque’s side look to retain the European championship for a third successive tournament.

The Group of Death contains Belgium, Italy, Sweden and the Republic of Ireland. Martin O’Neill’s men will be hoping to avoid a repeat of 2012. But it will ultimately be a battle between the three super powers of the group for top spot and a kinder knockout-stage draw.

Finally, Group F will see Portugal and Austria compete for the top spot as the two outsiders for the tournament look to avoid upsets against Iceland and Hungary.

According to Sporty Trader, England can expect to face Turkey in the last 16 before a meeting with Cristiano Ronaldo’s Portugal in the last eight. If Roy Hodgson’s side can get past the Portuguese, Spain will await them in the semi-finals.

However, could a final meeting against France prove a step too far? Sporty Trader thinks so.