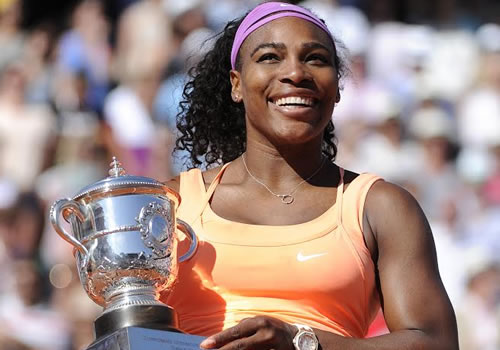 Serena Williams is the defending champion in Paris Photo: FFT

Coming into her 15th French Open, defending and three-time champion Serena Williams summed it up quite simply.

Asked about her season so far, she said: “Obviously for me, if I’m not winning I’m not happy about my year. Four tournaments, three finals isn’t bad for I think everyone else. Then again I’m not everyone else.”

The mighty Williams, who will turn 35 in September, has been notching up Grand Slam titles—and Olympic and many other titles—since she first hit tennis’s centre stage at 16 years old to reach the second round of the Australian Open: She would go on to win six titles there.

That year, she would not turn 17 until she had played all four Majors, and she won the openers in all of them. Indeed only once in her 62 Grand Slam singles appearances has she lost in the first round, and has gone on to win 21 from 26 finals—oh, and 13 doubles titles with her sister Venus and two more in mixed doubles. She is, thus far, the only woman to hold all four singles Major titles at the same time twice—in a span separated by 12 years.

Throw in four Olympic golds—one of them in singles—and five WTA Championships from seven finals, and then stir in almost 300 weeks and counting as world No1, and no, she is not like anyone else.

She has done it her own way, too. Unlike Roger Federer, who played every Grand Slam in a row this century, 65 of them, Williams has taken extended breaks—sometimes forced to by injury, sometimes for less tangible reasons. One has only to look at the introduction to her Wikipedia page: “Injuries and comeback”; “Back to No1 and injuries”; “Return to dominance”.

Take 2010: After defending her Wimbledon title, she would miss almost a year after stepping on glass and subsequently suffering a near-fatal pulmonary embolism the following spring. Yet in 2012, she won Wimbledon and the US Open again, along with Olympic gold.

Take this year: As she pointed out, she has played only four tournaments so far this season, and those after an absence dating back to the US Open where the physical and mental pressure of trying to tick off one more special record—the calendar Grand Slam—left her exhausted.

In such circumstances, it takes an exceptional talent and athlete to hit the ground running, as Williams did in Australia with a final finish, followed by a final finish in Indian Wells too. She then pulled off the same feat in Rome last week, her first clay event of the year but her first title since Cincinnati last August.

Until Rome, there were perhaps a few doubts about whether Williams could possibly be a contender for the French Open: Now she is arguably the favourite once more, especially with the incentive of that Open era record-equalling 22nd singles Major on offer.

And should anyone doubt her desire to win the Suzanne Lenglen trophy, Williams leaves no doubt in the minds of the opposition.

“I think in the past there was [a different mindset in defending a title]. I think now it’s different because I want to win more than I think most people ever. But also I think it’s different now because I don’t have anything to prove—it’s just a different feeling.

Rome was her 13th clay title, by far the most among active women, and her 70th title overall. And perhaps her relatively short residence on clay this year will give her the reserves to make life rather easier than they were last year: She played five three-setters, four of them after losing the first set.

Among those testing challengers was Victoria Azarenka, then ranked 27 after extended injury concerns of her own, but this year she is back to No5 after back-to-back wins in Indian Wells and Miami. And as luck would have it, the two women have been thrown into each other’s quarter in Paris again, and could meet for a 22nd time if the draw plays out to form.

For if there is a fly in the ointment for Williams, it is the tough draw she has been dealt here. For while her opening seed, Kristina Mladenovic, has had a poor season so far, this segment also contains the in-form Timea Babos, ranked 44 on the back of some decent clay results over the last month.

Round 4 could contain former French Open champion—and semi-finalist last year, Ana Ivanovic, or the unseeded Madrid quarter-finalist, Soran Cirstea. Alternatives for the quarters, should Azarenka’s back problem of a fortnight ago not be resolved, include more dangers in the shape of Dominika Cibulkova and Carla Suarez Navarro.

Beyond that and into the semis, and Williams could meet her sister Venus, or the woman who beat her to the Australian title, Angelique Kerber, or in-form Timea Bacsinszky, who was champion in Rabat, quarter-finalist in Rome, and semi-finalist at Roland Garros last year.

But Williams thinks she is ready, and not just in terms of match-play and confidence. After her trials here last year, she is leaving nothing to chance.

“I take vitamin C every single night… And I’m really trying to regulate my temperature. You know, like it’s so cold again this year. So hopefully it will heat up a little bit.”

And it is, indeed, chilly and damp in Paris, much as it was in Rome—and with heavy rain forecast for the opening few days. It will be a challenge for players and ground-staff alike, but Williams will be up to the challenge.

“I think it just boils down to this is what I do. I’m very competitive on the court… I like to do the best that I can, and if not, I work hard. I’ll figure out a new way to be the best that I can be to my potential. Honestly, I just think I’m just blessed to be able to be good at what I do.”

Williams opens against Magdalena Rybarikova—and don’t be surprised if she is still around come final Saturday, too.