Ana Ivanovic will feature in the Mallorca Open, which will be the first tennis event played on grass in Spain 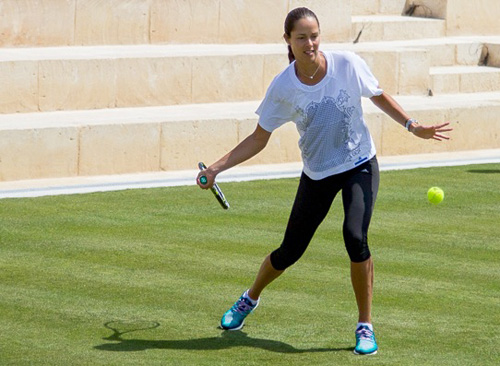 When Wimbledon last year moved the sacrosanct fortnight of The Championships to a week later in the schedule, it opened the door for a fuller, greener return to tennis’s roots, the grass.

Where once Queen’s and Halle butted up against the French Open’s clay, as was now a week’s gap, into which has been slotted a choice of two ATP250 tournaments, the well established ‘s-Hertogenbosch in the Netherlands and the Mercedes Cup in Stuttgart, which switched from post-Wimbledon clay to post-Roland Garros grass.

Then, to boost a little more the standing of the grass season, Queen’s and Halle were promoted to ATP500 level. And rounding off the Wimbledon preparations came the 48-man tournament in Nottingham, which moves back alongside the WTA tournament in Eastbourne next year.

This week, however, comes the announcement of a new ATP250 event from next summer, in Antalya, Turkey, to be scheduled alongside Eastbourne.

To ensure that this unusual location for grass tennis fits seamlessly into the Wimbledon swing, the All England Club itself will oversee the construction of the seven grass courts that will host a 28-man singles draw and a 16-pair doubles draw.

The tournament will be hosted at the Kaya Palazzo Belek, a luxury hotel resort that includes an 18-hole golf course and multiple football fields, and the grass courts will be added to facilities that already include 10 clay courts, eight hard courts, and four indoor courts.

The women’s tour has also taken full advantage of the extra week’s preparation for Wimbledon. The WTA calendar opens with two Internationals in Nottingham and ‘s-Hertogenbosch, followed by back-to-back Premier events in Birmingham and Eastbourne. And today, the WTA launched its own ‘new kid on the block’, an International in Mallorca that will be played alongside Birmingham’s Aegon Classic.

The Mallorca Open will be the first tennis event played on grass in Spain and, in another grass departure that can take advantage of the good weather conditions, will host night sessions.

The launch this week of what promises to be a popular and glamorous addition to the grass swing was appropriately high-profile. Ana Ivanovic tried out the new centre court at the tournament’s venue at the Country Club Tennis Academy Santa Ponsa with fellow former French Open champion and Mallorca-born Carlos Moyà, along with Rafael Nadal’s uncle and lifelong coach, Toni Nadal.

Ivanovic, who practised on turf that has also been tested and supervised by the All England Club, is one of an all-star line-up for the debut draw next month, among them world No4 Garbiñe Muguruza, former No5 Eugenie Bouchard and former No12 Sabine Lisicki (all three of them Wimbledon finalists in 2015, 2014 and 2013, respectively).

Muguruza laid the foundation stone for the centre court two months ago, saying:
“I can’t wait for this tournament to start. I am really happy because this surface is one of my favourites. In Spain we have a clay tradition but I think this novelty is great news.”

At the end of the tournament, selected ATP players—among them Feliciano Lopez, Dominic Thiem, Philipp Kohlschreiber and Moya—will compete in the inaugural exhibition event, the Tony Nadal Trophy.

The grass calendar
Despite the growth of the pre-Wimbledon tennis calendar, the grass season remains the only one without an ATP Masters or a WTA Premier 5 or Mandatory event.