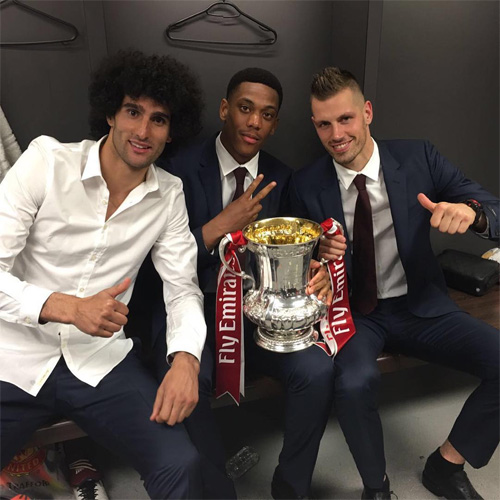 Anthony Martial was all smiles with Marouane Fellaini and Morgan Schneiderlin as the Manchester United trio celebrated their FA Cup win in the Wembley dressing rooms on Saturday night.

The Red Devils ended a 12-year wait to win the trophy thanks to Jesse Lingard’s extra-time winner at the home of English football to complete United’s comeback.

Martial scored two times in seven FA Cup games to end his first season in the Premier League with some silverware despite finishing fifth in the top-flight table.

The 20-year-old posted with his compatriot Schneiderlin and Belgium team-mate Fellaini with the FA Cup trophy in the dressing room following the win.

Martial posted the above photo and wrote: “Champion 🏆🏆🏆”

The France striker moved to United in a £36m deal from Ligue 1 side Monaco in the summer transfer window last year.