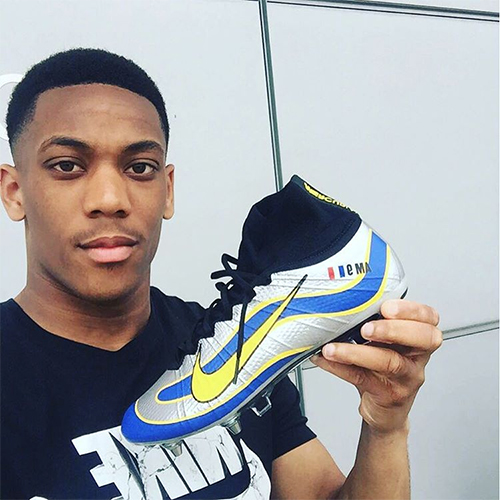 Anthony Martial took to Instagram to show off his new boots designed by Brazil legend Ronaldo ahead of Manchester United’s rescheduled clash against Bournemouth on Tuesday.

The Red Devils forward was one of the nominees in the PFA young player of the year award, although the France international was beaten by Tottenham Hotspur midfielder Dele Alli.

Martial has enjoyed a whirlwind first season in the Premier League after a return of 11 goals and three assists in 30 top-flight games so far this term ahead of Tuesday’s clash against the Cherries.

And the 20-year-old showed off his Ronaldo-inspired boots on photo-sharing app Instagram as Martial looks to add to his goal tally ahead of next weekend’s FA Cup final at Wembley.

Martial wrote: “These boots are @ronaldolima make sure you send me some @nikefootball #Mercurial #ElFenomeno”

The French forward will get his second taste of Wembley on Saturday afternoon when United face Alan Pardew’s Crystal Palace side at the home of English football.