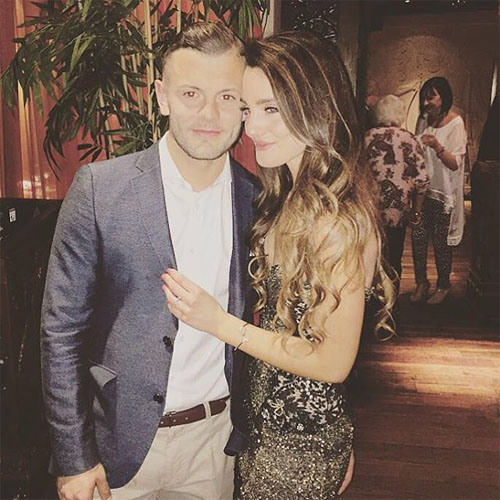 Jack Wilshere dedicated a heartfelt message to his stunning fiance on Monday night after the Arsenal midfielder became engaged ahead of Euro 2016.

The 24-year-old proposed to his girlfriend Andriani Michel ahead of being named in Roy Hodgson’s England squad for the European championship.

Wilshere has enjoyed a promising couple of months after he made his comeback from a long-term injury in Arsenal’s goalless draw with Sunderland in late April.

The England man made his first Premier League start of the season on Sunday afternoon as Arsenal eased to a 4-0 victory over Aston Villa at The Emirates.

And Wilshere became engaged on Monday night to cap what could be a special summer and year for the Gunners star.

Wilshere posted the above photo and wrote on his Instagram page: “This weekend the beautiful @andriani_m made me the luckiest man in the world and said yes! Couldn’t be happier….love you fiancee ❤️🙌🏻”

Arsenal hoisted themselves above Tottenham Hotspur and into second place courtesy of their 4-0 win against Aston Villa on the final day of the Premier League season.