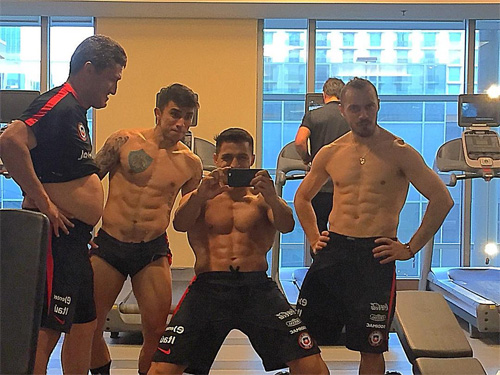 Alexis Sanchez appears to be a fan of the Teenage Mutant Ninja Turtles after the Arsenal forward roped some of his team-mates into his bale for an Instagram snap.

The South American is currently on international duty with Chile as the holders prepare to defend their Copa America crown.

Sanchez, who was handed the Arsenal number seven shirt earlier this month, helped Chile win the tournament for the first time last year.

And the 27-year-old appeared in a relaxed mood as he goofed around with his Chile pals and attempted to imitate the Teenage Mutant Ninja Turtles on Sunday.

The South American scored 13 goals in 30 Premier League games for the north London side last season.

Sanchez moved to Arsenal in a £35m deal from La Liga side Barcelona following the 2014 World Cup.

The Chilean star has won the FA Cup since his move to The Emirates.