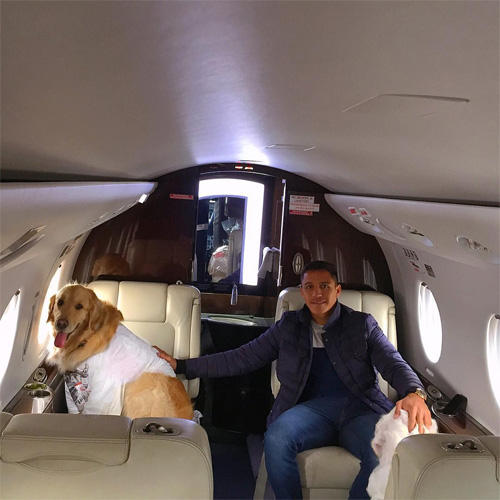 Alexis Sanchez may be used to travelling in his style but his golden retrievers received the private jet treatment on Sunday.

The Arsenal forward will attempt to help Chile defend their Copa America crown this summer after Sanchez and his compatriots won the tournament for the first time last year.

Sanchez endured a mixed campaign for the Gunners after he failed to hit the same heights as the 2014/15 season, scoring 13 times in 30 Premier League appearances.

However, the South American looked in an upbeat mood as he headed to Chile city Tocopilla with his dogs Atom and Humber on Sunday night.

Sánchez converted the winning kick in the final as Chile defeated Argentina in a penalty shootout to win their first major title, the Copa America, executing his spot-kick in the Panenka style.

The Chile forward finished the season without silverware at club level after having won the FA Cup in his first season at The Emirates.

Photo: Kevin De Bruyne all smiles with Tottenham defender ahead of Switzerland trip