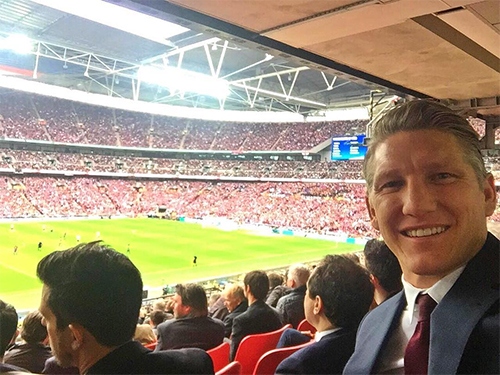 Bastian Schweinsteiger snapped a selfie in the stands at Wembley as Manchester United eased to a 2-1 victory over Crystal Palace in the FA Cup final.

The Germany international hasn’t played for the Red Devils since their 1-0 victory over Manchester City at the Etihad Stadium earlier this year due to a knee injury, which kept him sidelined for Saturday’s showpiece at Wembley.

However, Schweinsteiger wasn’t allowing his fitness problems to dampen his spirits as he savoured his first taste of FA Cup final day on Saturday afternoon, breaking into a huge smile for a selfie which he posted on his Instagram page.

The World Cup winner posted the above photo on his Instagram page and wrote: “Promising first half here at Wembley as we had the better chances! Keep going, @manchesterunited! #WeAreUnited”

The 31-year-old has endured a mixed first season in English football, scoring his only goal in a 1-1 draw with Leicester City at King Power Stadium in November.

Anthony Martial reveals whether he is happy at Man United