Photo: Cesc Fabregas all smiles with beautiful wife after Chelsea draw 1-1 with Leicester 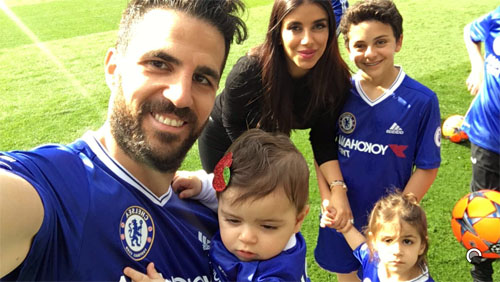 Cesc Fabregas posed for a selfie with his wife and two daughters on Sunday following Chelsea’s 1-1 draw with Leicester City.

The Spain midfielder helped the Blues secure a point against the newly-crowned Premier League champions on the final day of the season.

Fabregas has enjoyed a strong end to the season under Guus Hiddink after he initially struggled to find form under axed Chelsea manager Jose Mourinho.

And the World Cup winner was in an upbeat mood as he posted a photo with his wife Daniela and daughters Lia and Capri on the pitch at Stamford Bridge on Sunday afternoon.

The 29-year-old has scored five goals and has made seven assists in 37 Premier League appearances for the west London side this season.

Fabregas moved to Chelsea in a £27m deal from La Liga giants Barcelona in 2014 after he swapped Arsenal for Camp Nou in a £35m transfer in 2011.