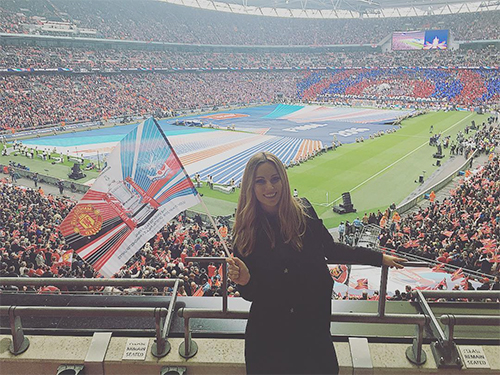 The Red Devils looked to be heading for a third defeat in the FA Cup showpiece since their 2004 triumph when Jason Puncheon broke the deadlock for Crystal Palace at Wembley.

However, United captain Wayne Rooney inspired a comeback with a superb solo run and cross which led to Juan Mata’s equaliser just minutes after Puncheon’s opener at the home of English football.

Jesse Lingard came on as a second-half substitute and the England international scored what proved to be the winner with an instinctive volley past Palace goalkeeper Wayne Hennessy.

And De Gea’s girlfriend Edurne posted a photo of herself at Wembley waving the flag for United’s cause and wrote the following message on the social media website: “🎉🎉Manchester United campeón de la FA Cup!!!🎉🎉🏆🙆🏼🙅🏼🙆🏼🙅🏼🙆🏼
Felicidadessss @d_degeaofficial 😍👏🏼👏🏼👏🏼
Congratulations @manchesterunited 🙌🏼🙌🏼🙌🏼”

The United goalkeeper has won the Premier League and the FA Cup since his moved to Old Trafford in 2011.