Photo: Find out why new Liverpool signing is feeling sad 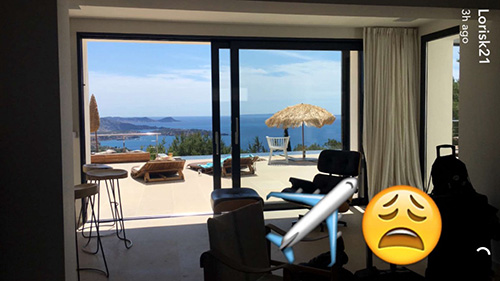 Loris Karius was in a downbeat mood on Monday as the new Liverpool signing prepared to say goodbye to Ibiza following a summer break.

The 23-year-old jetted out to the Spanish island last week after the goalkeeper completed a £4.7m transfer to Liverpool from Bundesliga side Mainz.

Karius put pen to paper on a five-year deal with the Merseyside outfit after becoming Jurgen Klopp’s first signing of the summer transfer window.

The Germany Under-21 goalkeeper has been entertaining his Snapchat followers with clips of his balls skills after a game of foot tennis with pals.

Karius has also posted photos of their grub and activities during a short sunny break in Ibiza before preparing to swap Germany for England.

But the new Liverpool signing was in a subdued mood on Monday afternoon as he prepared to leave his holiday spot.

Karius has been handed the number one shirt at Liverpool following his summer transfer.