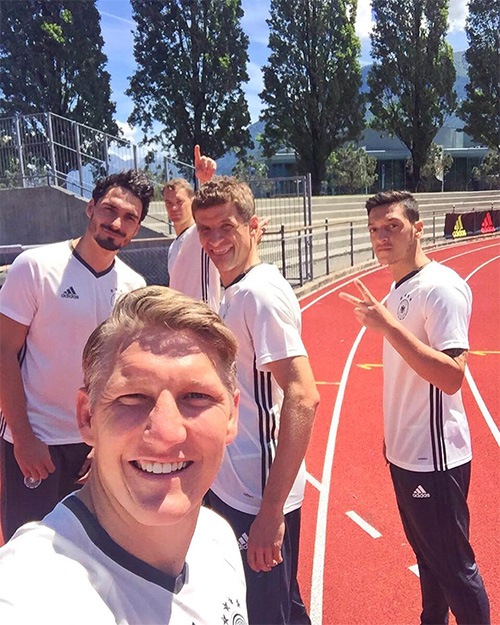 Bastian Schweinsteiger was in good form on Wednesday with Mats Hummels, Manuel Neuer, Thomas Muller and Mesut Ozil as Germany geared up for their friendly against Slovenia.

Joachim Low’s Germany squad are one of the favourites to win Euro 2016 in France this summer after securing a 1-0 victory over Argentina in the World Cup almost two years ago.

Schweinsteiger, who moved to Manchester United from Bayern Munich last summer, is expected to be a key part of Low’s side despite being sidelined for the past few months with a knee injury.

The Red Devils have been linked with a move for Bayern and Germany striker Muller in recent months as the 20-time English chmapions look to bolster their attacking options.

And Schweinsteiger was clearly enjoying the company of some of his former Bayern team-mates and Germany pals on Wednesday afternoon.

He wrote the following caption: “Group selfie at work”

Schweinsteiger confirmed that he is set to be ready to feature at Euro 2016 in a press conference on Wednesday.

“I did the tasks given to me by the medical team and it’s looking very good for me,” Schweinsteiger said.

United finish in fifth place in the Premier League table.