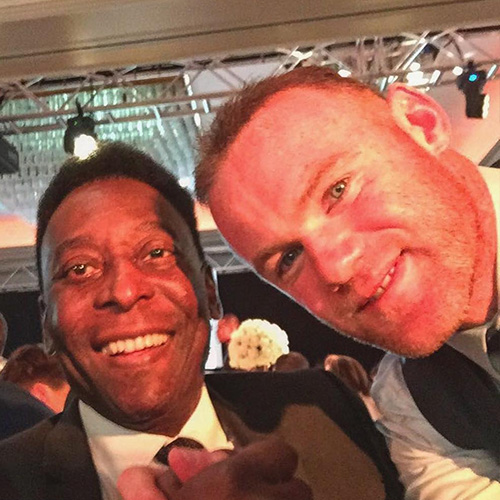 Wayne Rooney was all smiles with Brazil legend Pele at a charity event on Sunday night ahead of England’s Euro 2016 campaign.

The Manchester United striker has already written himself into England folklore after he became his country’s record goal-scorer last year following his 50th England goal from the penalty spot against Switzerland last year.

Rooney still has some way to go to match Pele’s tally of 77 goals in 91 Brazil caps, not to mention the legendary striker’s two World Cup triumphs and 10 other international trophies.

England supporters will be hoping that Rooney’s brush with a footballing great can inspire the Three Lions captain to an influential performance in this summer’s European championship.

Rooney is only four goals behind Sir Bobby Charlton’s record of 249 goals for United after having already broken the England legend’s goal tally for the Three Lions.

The United skipper is set to play under Jose Mourinho next season.