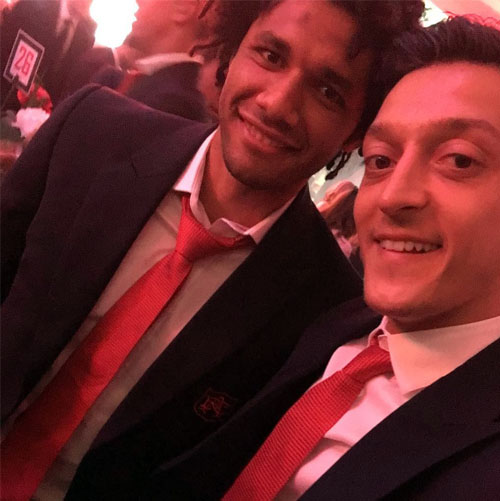 Mohamed Elneny posed for a selfie alongside Mesut Ozil as the Gunners squad attended the Arsenal Foundation Ball on Thursday night.

The Egypt international was attending the annual fundraiser for the first time as the defensive midfielder mingled with his Arsenal team-mates.

Elneny has been a big positive for the Gunners after he moved to The Emirates in a £7m deal from Swiss champions Basel in the January transfer window.

And the 23-year-old joined Arsenal’s club-record signing Ozil for a selfie on the charity night ahead of the Gunners’s final Premier League game of the season at The Emirates on Sunday afternoon.

Elneny kept his caption simple with an emoticon: “😉”

Arsenal will host relegated Premier League side Aston Villa at the Emirates Stadium in their final game of the season on Sunday.

Elneny scored his only Arsenal goal in a 3-1 defeat by La Liga champions Barcelona at Camp Nou in the second leg of their Champions League last-16 clash.