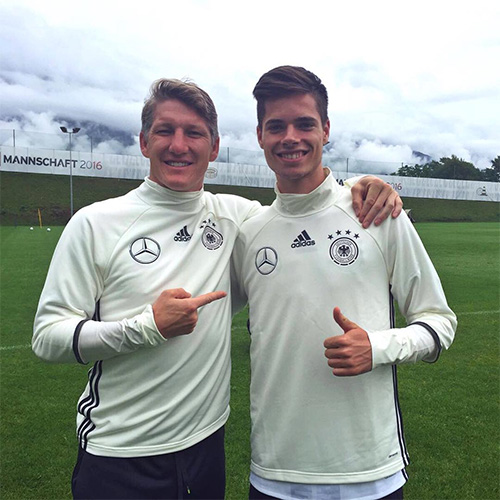 Bastian Schweinsteiger has talked up Arsenal target Julian Weigl on Instagram as the Germany squad prepare for this summer’s European championship.

The 20-year-old was voted the Bundesliga’s young player of the year after Weigl made 30 top-flight appearances for Dortmund over the course of the 2015/16 season.

The defensive midfielder’s impressive performances caught the eye of Joachim Low, who has included the youngster in his Euro 2016 squad for the French tournament.

Arsenal have also been keeping close tabs on Weigl ahead of a reported move for the Dortmund midfielder in the summer transfer window.

And United midfielder Schweinsteiger is certainly a fan of the Dortmund prospect after he took to Instagram to endorse the 20-year-old on Monday afternoon.

Schweinsteiger wrote: “One of our top talents coming from near my hometown! Congrats to your debut, Julian! 👍🏼 #JederFuerJeden”

The former Bayern Munich midfielder moved to United in a £6.7m deal from the Bundesliga champions last summer.

However, Schweinsteiger was sidelined for the final months of the season due to injury.

Photo: Find out why new Liverpool signing is feeling sad