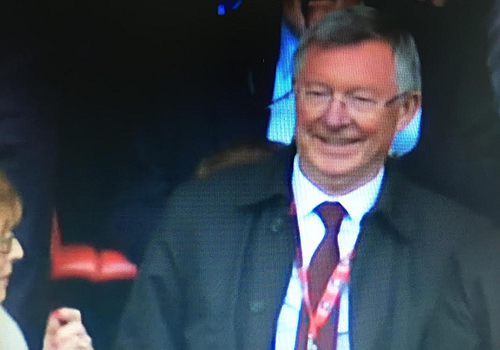 Sir Alex Ferguson was in the stands at Wembley Photo: BT Sport

Sir Alex Ferguson looked to be delighted as Manchester United won their first trophy since his retirement following a dramatic FA Cup final win over Crystal Palace on Saturday.

The Red Devils hit the bar through a Marouane Fellaini shot and an Anthony Martial header but went behind when Jason Puncheon drove in an angled shot in the 78th minute at Wembley.

However, Juan Mata volleyed home an equaliser just 175 seconds later, before Chris Smalling was sent off for United.

And substitute Jesse Lingard thumped in a winner after 110 minutes to hand United their first trophy since 2013.

Judging by the photograph above, Ferguson seemed to be delighted to see Louis van Gaal’s men win the trophy.

The result brings a welcome relief for the Red Devils after they missed out on a top-four finish in the Premier League on the final day of the season.

It remains to be seen whether Van Gaal will still be in charge next season.