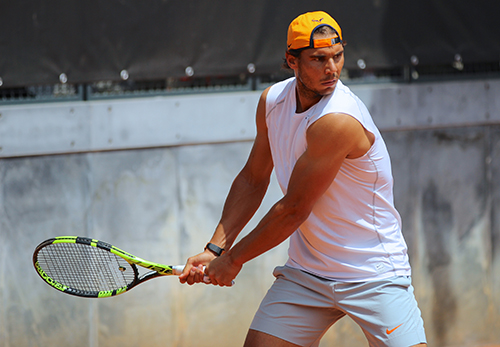 Rafael Nadal will renew his rivalry with an old foe on Friday Photo: Marianne Bevis

This week in Rome, the clay overture to the French Open, both the men’s and women’s draws posed as many questions as answers. As the glamorous tournament at the Foro Italico headed past the half-way point, some of those questions had answers, but a few new ones had joined them.

In a women’s draw already without big names such as Agnieszka Radwanska, Maria Sharapova and Belinda Bencic, the 56 starters were reduced to 16, but just five seeds remained, and only one former champion, Serena Williams. Out of the picture were Victoria Azarenka, Angelique Kerber, Simona Halep, Petra Kvitova and more—all down at the first hurdle. Williams, though, rose to the challenge.

So the talk was of a wide-open field ready to embrace a new name not just in Rome but possibly in Paris. Looking particularly strong was No3 seed Garbine Muguruza, into the quarters for the loss of just six games, but Briton Johanna Konta, who this week dispatched No7 seed Roberta Vinci, had her run ended by the Japanese left-hander ranked 20 places below her, Misaki Doi, in three tough sets, 4-6, 7-5, 6-2.

The story looked very different in the men’s draw—at least until now. Eleven of 16 seeds remained in contention for quarter-final places, and the top five, who account for 53 of the last 56 Masters titles, were all present and correct—even Roger Federer, who was not even certain of joining the competition until he had completed his opening-match warm-up. For like Williams, he had been notable by his absence for much of the season with illness and injury.

But already in Rome changes were afoot on the men’s side, too. The first of the big names to depart was Federer himself: As he himself had predicted, he was unable to go deep this year, despite four previous finals. Instead, young blood Dominic Thiem set up a thriller against No6 seed Kei Nishikori, who produced blistering form to beat Richard Gasquet, 6-4, 6-1.

Then Federer’s compatriot and French Open champion Stan Wawrinka, ranked No4, felt the heat of Juan Monaco, a clay court exponent making his way back from extended injuries with a protected ranking. The Argentine was always going to be a danger, and he turned around a deficit to win, 6-7, 6-3, 6-4.

But Monaco would not be taking on the expected seed in the quarters, for No9 seed David Ferrer, who has struggled with his usually consistent form for much of the season, lost in quick order, 6-4, 6-1, to Lucky Loser, Lucas Pouille.

Just as 22-year-old Thiem has been surging through the rankings this season, so has the 22-year-old Frenchman. Pouille, who beat Gasquet in Monte-Carlo and made his first final on the Bucharest clay last month, is now into his first Masters quarter-final.

However the outstanding win of the day belonged to another in-form man, David Goffin. He beat No8 seed Tomas Berdych in just 49 minutes in that most rare of scores, 6-0, 6-0—and it was hard to tell who had the biggest smile when it was all over. Goffin, who had not won a set from Berdych in their previous two meetings, has reached two Masters semi-finals this year, and hit 21 winners to just five errors in this trouncing.

If he is to reach another Masters semi, however, Goffin has to beat the only remaining top-10 man in the bottom half, No2 seed Andy Murray, who also reclaims the No2 ranking from Federer ahead of Roland Garros after beating Jeremy Chardy, 6-0, 6-4.

The last time Murray and Goffin met was in the final of the Davis Cup last November, during which the Briton sealed the title with his third win over the Belgian. Goffin has stepped up a level this season, but then Murray’s clay form has been good, too, not least in beating Rafael Nadal to reach the Madrid final.

But what of the only Rome champions in the draw, the two who have won the last 11 titles, Novak Djokovic and Nadal? Ill fortune determined that these two were drawn into the same quarter, and that meant only one of them could even reach the semis this time around.

But to set up the dream quarter-final, both had their work more than cut out.

Nadal was up against the young firebrand and huge talent, Nick Kyrgios. They had met once before, two years ago at Wimbledon, when the then teenager was ranked 144 and Nadal No1. Kyrgios won in four sets.

But Rome for Nadal is like a warm bath: seven titles and 48-4 on the Foro Italico’s courts. He dispatched the craft of Philipp Kohlschreiber with ease, but Kyrgios would once again prove a handful, as he had proved in beating No10 seed Milos Raonic.

After conceding a break apiece in the first set, Kyrgios surged through the tie-break for the loss of just three points. Then Nadal lifted his level in the second set to open with a love break, and raced to a 5-1 lead as Kyrgios took a medical time-out for treatment to his hip. Nadal levelled the match, 6-2.

Both played some stunning points at the start of the third set, with Nadal’s recent run of form on clay on full view. He broke early and served superbly, dropping only five of 30 first-serve points, so there was no way back for the young Australian. Nadal advanced, 6-4, after 2hrs 40 mins.

But now defending champion Djokovic had to do his bit. He had already found qualifier Stephane Robert a tough nut to crack, only breaking at the last gasp in each of the two sets, 7-5, 7-5. He now had to beat unseeded Thomaz Bellucci, and in a dramatic turn of events, the unfancied No37-ranked left-hander stormed through the first set as Djokovic sprayed errors in all directions.

The second set began in high tension, too, as Djokovic battled through deuce after deuce under bombardment from Bellucci, but at last he held serve to get on the scoreboard and lifted his arms aloft to grin in celebration. It was a turning point, and before the hour was up, he had levelled the match, 6-3.

Needless to say, he would not let his grip of the match go, and quickly broke in the third set for 3-1. The eventual 6-2 scoreline to Djokovic did not do justice to the fight that Bellucci maintained to the end, but there was no denying who the Rome crowd wanted to win this one. They wanted that 49th meeting against Nadal, one of the most played and close rivalries in tennis history.

Tune in Friday afternoon, and cross fingers and toes that the predicted storms hold off for the champions’ first clay encounter since the French Open last year.