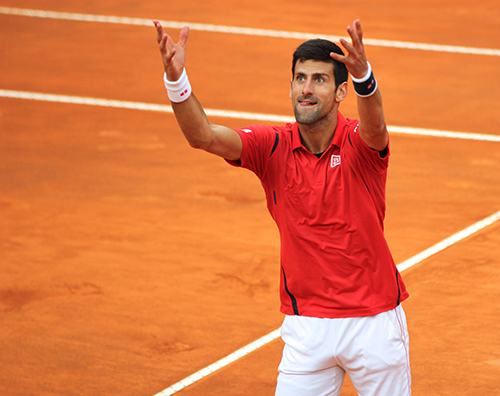 From the very first, from the moment the draw for the Rome Masters was made, this had been the match on everyone’s lips.

For not only did top seed Novak Djokovic draw No3 seed Roger Federer into the half. He also had the misfortune to find the most successful clay-court player of his generation, with a record-equalling 49 titles on the red dirt, in his quarter: Rafael Nadal.

Certainly this latest face-off was eagerly anticipated, but it was also highly significant.

First, Djokovic and Nadal have dominated Rome, winning the last 11 titles at the Foro Italico between them: seven-time champion Nadal claimed his first title more than a decade ago, and four-time champion Djokovic was also the defending champion. But this time around, they could not even set a semi-final meeting, let alone a title bout. Indeed they had not met so early in Rome since the first of their five previous meetings here, again in the quarter-finals, way back in 2007.

Second, these two have the most played rivalry in history: This would be a remarkable 49th meeting. And while Nadal dominated the early goings, and still held the edge in clay meetings by 14-6, the form of the super Serb over the last couple of years—16 titles form 20 finals since the start of last year, and only two of them below Masters or Grand Slam level—had given Djokovic the edge. Now he led Nadal 25-23, and with the Madrid title last week, overtook Nadal to top the all-time list in Masters titles, too.

Third, Djokovic had stolen an even bigger march on Nadal in recent meetings. With Nadal suffering illness and injury during the latter stages of 2014, his confidence and ranking took a hit last year—down to No10 at one stage. Which meant that, since Nadal’s win over Djokovic at Roland Garros in 2014, he had lost all six meetings, beginning on Monte-Carlo’s clay last year, taking in the French Open a month later, and through to Indian Wells this spring.

Fourth, both had proved that their clay form was in good shape. Nadal arrived with a 19-3 run for the season, including the Barcelona and Monte-Carlo titles. Djokovic, for his part, won in Madrid less than a week ago. And both were well bedded in on Rome’s centre court after both came through three-set third-round challenges.

Of course, for all the facts and figures, one matter remained head and shoulders above the rest: Roland Garros. Nadal’s residence as champion in nine of the last 10 years was halted by Djokovic last year. Meanwhile, the world No1 has made no secret of his ambition to complete his career Grand Slam in Paris where he has been thwarted in the final in three of the last four years.

The stakes for both men, then, were high. As Andy Murray put it after making his own way to the semis:
“I think it’s an important match for both. Obviously when you’re playing against the best players, especially with a Major event just round the corner, you want to perform well. If Rafa were to win, I’m sure that would give him a big boost confidence-wise with the French coming up. For Novak, he’ll want to keep the momentum going. Yes, it’s an important match, for sure.”

The measure of the rivalry was writ large in the stadium. There was not a seat to be had, and the most vocally partisan crowd—split evenly between the two champions—maintained a passionate soundtrack from the first dazzling point, won incidentally by Nadal.

But Djokovic was out of the gates quickly with an aggressive service hold, and they edged via their characteristically long and intense rallies to 2-2 before a pugnacious Nadal got the first breakthrough, and backed it up with a hold: 4-2.

Djokovic, though, pressured the Spaniard with clean, deep strikes to the baseline corners, and after a tough hold, he eventually broke back at the third attempt to level, 4-4, when Nadal put a forehand long.

Djokovic held for 6-5 with a stunning drop-shot-lob combo backed up by a passing winner, and took the set in dramatic style through countless deuces and four break points, with a remarkable high volley conclusion, 7-5. It had taken an hour and 11 minutes, but the second set would take still longer.

With grey clouds billowing overhead, they now had to contend with early floodlights as well as swirling clay dust, but it was again Nadal got the early advantage with an immediate break. Djokovic threw his racket to the court in disgust, only to sit by as Nadal called the trainer to court. The Spaniard had a foot problem, but with his bindings removed, he continued unimpeded.

Djokovic was not ready to give up the set, however, and with Nadal serving to level at 5-4, the Serb quashed five set points to break back, and Centre Court erupted. This one would take a tie-break, and as is so often the case, a ruthless Djokovic was not about to let this slip: He maintained the lead through to its conclusion, 7-6(4).

He raised his arms aloft, bowed to each stand, and admitted:
“Winning against Nadal is the ultimate challenge on clay courts and one of the toughest challenges we have in sport. I have to be very pleased with the way I handled myself in the big moments today. I won against one of my biggest rivals on his preferred surface.”

It had taken almost two and a half hours and left the fans of both men drained: Such has been this rivalry, such their greatest matches. After 171 points, they were separated by just three. But for now, it remains Djokovic who holds the ascendancy—just.

The world No1 goes on to face either Kei Nishikori or Dominic Thiem for a place in the final.