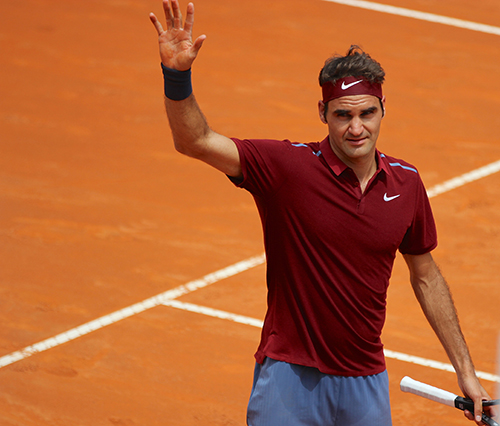 Roger Federer has been making waves in tennis for almost 18 years: It was in 1998 that he won junior Wimbledon and reached his first senior quarter-final.

Now it is Alexander Zverev who is making waves, and a lot of them. He broke the top 100 at barely 18, and so far this season has been setting career highs and new milestones almost weekly. Now up to No43, he was this week debuting in the main draw of his third big tournament in a row.

In Monte-Carlo he won his first match against fellow teen star Andrey Rublev. In his first Barcelona, he reached the third round. In Munich, where he was given a wild card in two previous years, he reached the semi-finals, beating one of the form men of the spring, David Goffin, in the process.

Now in Rome for the first time, and the youngest man in the main draw, he also notched up his first win, and again it was at the expense of one of the men touted as the ‘next big thing’.

Grigor Dimitrov, with a game based on his childhood idol Federer, also won junior Wimbledon, went on to reach the senior Wimbledon semis in 2014 and broke the top 10, but had struggled to build on his success. By the time he played Zverev, he was ranked at 35, and had already suffered one loss to the teenager.

This time, the Rome crowds, in what was billed as a ‘popcorn first-round match’ expected a similarly close contest, but what they got was a lesson from Zverev in how to dominate from the baseline with huge strikes of the ball, with angle, with depth and pace: 6-1, 6-4 in 69 minutes.

But that set up what many considered the ‘real’ popcorn match: a first-ever meeting between Zverev and the very player who inspired Dimitrov: Federer.

The young 6ft 6in German beat Marin Cilic in Montpellier, Gilles Simon in Rotterdam and Indian Wells, and blew a match point against Rafael Nadal in Indian Wells, but he had yet to play Federer.

Zverev in fact knows the Swiss well, having been his training and practice partner many times. As he explained in Rotterdam this year:

“When I got to know [Federer], he’s even more my idol now: He’s been giving me tips on tournaments. He always takes me to practice…I don’t know why, to be honest! He’s been a big help, telling me how to act on court and what to do in the important moments.”

Zverev has clearly been an assiduous pupil, and now was his chance for a very significant first in his first Rome Masters. He described it thus:

“It’s always something that I dreamed about, playing against Roger… Playing against your biggest idol—and I think he’s the best tennis player that ever played the game—is going to be something really big for me, something great. Hopefully we can have a great match.”

And asked if he felt ready to beat him, Zverev paused, smiled, and said:
“We’ll see after tomorrow.”

Tomorrow did not in fact come: the match was scheduled as the opener on Wednesday, for the fly in the ointment was Federer himself.

The Swiss No3 seed has suffered a catalogue of woes this season after years of largely injury-free tennis. He faced his first-ever surgery—to his knee after the Australian Open—and so bypassed scheduled tournaments in Rotterdam, Dubai and Indian Wells. In Miami, he pulled out before his first match with gastric illness, finally played three matches in Monte-Carlo, only to suffer a back injury as he prepared for the Madrid Masters.

It was, then, touch and go whether he would, or could, play in Rome. He had a few cautious practice sessions, but with no pre-tournament press to clear the air, Rome and Zverev waited.

More: Cheerful Konta moves in round two in Rome

Come midday, Rome was answered and the two men separated by 15 years and an eternity of experience, arrived centre stage. For Federer turned pro just a year before Zverev was born, and he brought all that expertise, and his multi-stranded skill, to bear—perhaps helped a little by all those training sessions.

The young German was clearly up for the fight, as their second long and testing rally proved. Federer held to love, and did so again in the fifth, but his serve motion was slightly compromised, as was his movement to the forehand wing. He would, indeed, serve at only 55 percent through the match, but with such placement and spin that he held with little trouble and broke with a return-of-serve drop shot in the sixth game.

Indeed his returning and defence would be stand-outs of the match as he sliced and diced on both wings, dropped balls short, and played to the lines in a master-class of tactical accuracy. He had the first set in 29 minutes, but would face a much tougher challenge in the second.

Federer could not convert a break point in the first game, and when he did break in the third, Zverev immediately broke back as his fast and penetrating strikes tested the Federer movement. The teenager also became comfortable in the extended sliced exchanges, roared himself to a tough hold at 4-3, and fought off break point for 5-4.

Now, though, Federer dug deep to produce more zip for 0-40, only to over-press on his returns for deuce. But one more bite of the cherry, and he got his reward. He served out the win, 7-5.

It was clearly an emotional conclusion for the Swiss, though the #NextGen will give him no let up. Lying in wait is another hugely talented player, 22-year-old Dominic Thiem, already with two titles this year and seeded 13.

He has had one taste of Federer already, in Brisbane, but whether he will get a second chance in Rome was thrown into doubt after Federer came to press:

“I don’t know how I’m going to feel tomorrow. I’m literally going practice after practice… It’s baby steps right now, so to even think of tomorrow is already a big ask.”

He was even more frank about how he went into this high-profile encounter:
“I was expecting to lose in straight sets today. That was the mindset going in, so to win in straights is actually a really big surprise to me. I played cautious, and I only decided after the warm-up that I was actually going to play. So for me it was a big match on many levels.

“[But] this was something I feel like I needed to do to get a sense of where I’m at… At some point you have to go out there and see how it feels, and I’m happy I was able to play a full match without any setbacks.”

Rome remains one of the few Masters that Federer has failed to win despite reaching the final four times, and he is resigned to not winning this year: “I’m too far off. [Smiling] I’m so far off that it won’t happen.”

He is not giving up hope, though.
“Of course maybe next year. Maybe sometime down the road. I don’t know. But I would have loved to win it.”

Next year, aged 35, will be Federer’s 17th visit to aptly named ‘eternal city.’

Fernando Morientes: Why I want Real Madrid to sign this Man United star