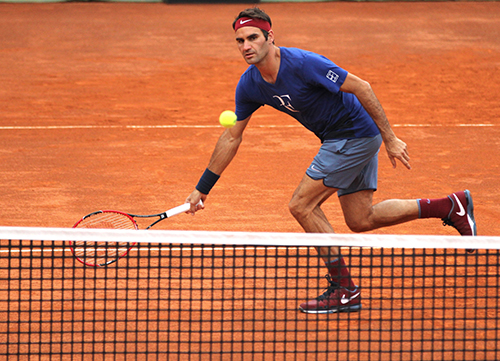 There were times during world No2 Roger Federer’s third-round battle at the Rome Masters when it was tempting to ask: “When is enough enough?”

The Swiss made no secret of his desire to get back on court after a season depleted by injury and illness to just three tournaments. Two of those were in the first month of the year, so when he arrived in Rome this week, he had played just three matches—and won two—in almost three and a half months.

After the Australian Open and knee surgery, he was forced to pull out of Rotterdam, Dubai and Indian Wells. Miami ended before it had started courtesy of gastric illness, and his quarter-final exit from Monte-Carlo was followed by more trouble in Madrid: a flare-up of the back issue that has been a recurrent problem through his career.

That he would play Rome at all was in doubt, and when he did come, his practices began tentatively.

When the draw was made—with the likes of Alexander Zverev, Dominic Thiem, and Kei Nishikori just to reach the semis—one might have forgiven him for sticking to the practice court ahead of the French Open. He was also drawn in the same half as the two Rome champions, Rafael Nadal and Novak Djokovic, just to make the same final stage as last year—which he needed to retain the No2 ranking for Roland Garros.

But play he did, and beat Zverev in a tactically astute two sets, after which it became clear just how last minute his decision had been.

“I was expecting to lose in straight sets today. That was the mindset going in, so to win in straights is actually a really big surprise to me. I played cautious, and I only decided after the warm-up that I was actually going to play. So for me it was a big match on many levels.”

It was all about the bigger picture, about getting the feel of competitive tennis after such a long absence:

“I’m coming off a brutal last few months, and I’m just happy to be able to play normal tennis to some extent… In terms of information, regardless if I’m going to play tomorrow or not, this was something I feel I needed to do to get a sense of where I’m at. It would have been easy not to play and then just be unsure how I was going to feel in Paris. At some point, you have to go out there and see how it feels, and I’m happy I was able to play a full match without any setbacks.”

He added: “To even think of tomorrow is already a big ask.”

There, then, was the get-out clause for the still sterner test against one of the best performers on the circuit this year. Thiem may have lost his first match with Federer in Brisbane in January—clearly gripped by nerves—but he had since gone on to win in Buenos Aires, beating Nadal in the semis, and made the semis of Rio via a win over David Ferrer.

Another title, this time in Acapulco, and a final run back on clay in Munich, and Thiem was up to 31 wins this year, and 15-4 on clay.

Again, though, Federer decided to play, and to his credit, he played another smart game designed to protect that back. His first choice spoke volumes: He won the toss and elected to receive, which given that he managed to put less than half his first serves into play in the first set, was probably as well.

However Thiem, who like Federer plays single-handed, was up to that task, and opened with a love game comprising two aces.

Federer faced a break point in the second game but three line-painting, swinging deliveries saved the day, and he unleashed two straight down-the-line winners to break in the fifth. But as quickly as Federer’s serve arrived it disappeared, and Thiem took advantage of a swathe of second serves to break back.

Another change of Swiss tactics saw Federer receive serve two metres behind the baseline, and it almost worked, too: He earned two break points for a 6-5 lead, but Thiem handled that ploy—he is a remarkably solid player on both wings at the baseline—and won four straight points to hold. The eventual tie-break never looked in doubt: 7-6(2) to the Austrian with a backhand winner worthy of the Swiss.

Set 2, and Federer was out of his seat very early. The accuracy of his serving improved but with little vim, and Thiem broke in the fifth. By this stage, in truth, it had become uncomfortable viewing, particularly as some in the packed stadium seemed unaware of Federer’s injury concern.

The Swiss showed flashes of resistance when he was in position to time his forehand—two return-of-serve bullets drew gasps—but too often he was out of position, and his timing went to pieces. The second set took a scant half hour, 6-4, for the admirable Thiem to record his fourth top-10 win and a shot at reaching his first Masters semi-final when he takes on Nishikori.

The quietly-spoken Thiem was rightly delighted by his win but also had mixed emotions about the victory.

“Of course he was not 100 percent, but still, he played some very good points. [But] you cannot put it out of your head. That’s what made it very tricky, and of course maybe against Roger at 100 percent, maybe I wouldn’t win today.

“I think he’s the idol of almost every tennis player. It was already very big for me to play against him in Brisbane, and now to beat him, even if he was not 100 percent, it’s very nice for me.”

Federer takes great pride in never having retired mid-match: He asserts that, if he is fit to take to court, he should be fit to finish the match. But there have been times when that bullish attitude has made for difficult matches.

The Masters Cup in Shanghai in 2008 is a prime example where, as here, he arrived after withdrawing from Paris with back trouble, but continued to play through sickness and on-court treatment, losing to Andy Murray after three hours. Was it wise? Could he have even played the next match had he won?

In Rome, Federer admitted after his first match that had no expectation of winning. This was all about getting court time. He put it thus:
“It doesn’t matter how I played. Important is that I didn’t have any setbacks and I was able to step on the tennis court.

“I’m happy I was able to play and still feel about the same as yesterday, not worse. That was most important… OK, it was compromised, but that I don’t care about.”

He did not let on whether he would have stopped had it got worse, though judging from Shanghai—and the summer of 2013 when he played through back problems for several months—he probably would. You don’t become an indomitable champion without a good dose of pride.

But here, Federer had an imperative aside from rankings. He has had precious little preparation for Roland Garros, and while he was bullish when he met the press in Monte-Carlo about his hopes of playing a good tournament in Paris, that has now been tempered.

“I feel like now time starts ticking more towards Paris. Next 10, 12 days are really going to be important for me to recover, and then make a plan.

“I’m confident and hopeful at the same time. I have only played five matches in the last, what is it, four months now, so clearly don’t want to get too overly excited about what’s ahead, but at the same time I’m a positive thinker, and I believe that I’m going to recover well from Madrid and here.

“I have a lot of hours on the clay already this year—maybe not on match courts but on practice courts. I actually thought I could really do a good result in Paris. Now the last couple of weeks it’s been more difficult… Clearly the way I’m playing right now is never going to be enough. I’m still confident I will be fine.”

He expects, then, to play the French Open where he does have a record to maintain: 65 consecutive Grand Slams and counting. Even in the worse scenario, a first-round loss, he will keep that one running.

But beyond Paris are more important prizes. Federer is not alone in thinking that the grass of Wimbledon is his best chance of one more Grand Slam title, and his original pre-injury schedule added Stuttgart to Halle in his run-up to London. One must assume, then, that he would not run the risk of damaging those ambitions.

A throw-away line as he departed his Rome obligations summed it up:
“Like I said, this is like, who cares about the results here? Now it matters what comes in the next couple of months.”