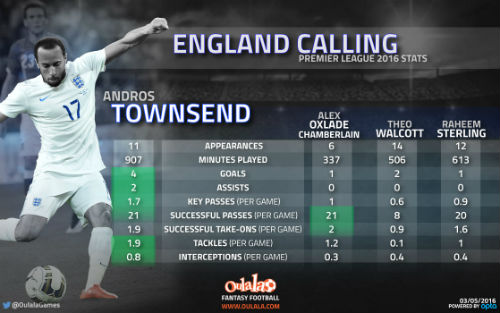 Andros Townsend is favourite to secure a place in England’s Euro 2016 squad ahead of Arsenal duo Alex Oxlade-Chamberlain and Theo Walcott.

Oulala’s infographic highlights why England manager Roy Hodgson could be set to call on one of his favourite players for the European championship in France this summer ahead of some so-called big names.

Townsend has played 11 Premier League games for Newcastle United so far this term, which is five more than Oxlade-Chamberlain but marginally less than Walcott (12) and Raheem Sterling (12).

However, the former Spurs midfielder has played significantly more minutes than the aforementioned trio, who have largely been used as options from the bench for Arsenal and Manchester City.

Townsend has scored four goals which matches the combined total of Oxlade-Chamberlain, Sterling and Walcott. The 24-year-old has also made two assists, while his England rivals have failed to create a single goal for their club team-mates in 2016.

His passing has been excellent too, successfully completing 21.

If Hodgson is looking for a winger to professionally carry out his defensive duties, then Townsend is the right man for the England boss. The Newcastle star has averaged 1.9 tackles per game, more than the Arsenal and City players.

He has also averaged 0.8 interceptions per game, which is significantly more than Oxlade-Chamberlain, Walcott and Sterling.

If Oulala’s stats are any indication, Townsend should be heading the pecking order for a place in Hodgson’s England squad.

Jamie Carragher: This Man United star produced one of moments of the season