"I was never used to that much attention, but I have embraced it," explains British number two Aljaz Bedene 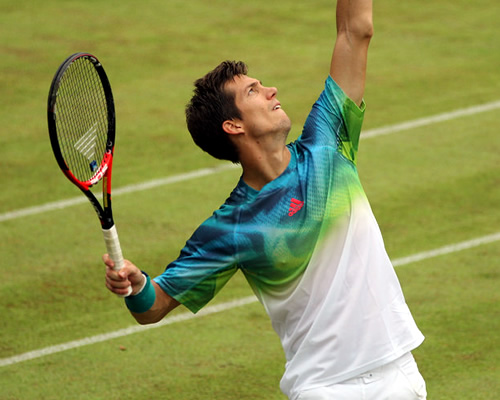 Aljaz Bedene in action at Stoke Park ahead of Wimbledon Photo: Marianne Bevis

The slight, quietly-spoken figure of British No2, Aljaz Bedene, who broke the top 50 at the end of last year, is a noticeably more relaxed individual than he was 12 months ago.

Not surprising, perhaps, given that at the beginning of last year, he was ranked at 156 and had yet to reach the final of a tour event. Since then, slowly but surely, the picture has changed.

In Chennai in January 2015, he came through three rounds of qualifying, beat two top-20 players, and eventually lost in the final to Stan Wawrinka.

Still ranked outside the top 100, he was having to qualify at every tournament, but boosted his points with Challenger titles in Irving, Rome, and Todi, made the quarter-finals in Casablanca—also via three qualifying rounds—and beat Roberto Baustisa Agut to reach his first ATP500 quarter-final in Hamburg. Along the way, he picked up his first wins at Wimbledon and the US Open.

This season, though, niggling injuries did his cause little good—first to his leg, then his wrist—and nor did the extended delays to the ITF hearings that would determine whether he could play for the British Davis Cup team. It was announced that he could not.

But come the French Open, a more confident Bedene began to emerge. In beating Gerald Melzer and then the higher-ranked Pablo Carreno Busta, the latter in a gutsy five-setter, Bedene looked both fit and confident. And he was into his first Major third-round match, against the world No1 Novak Djokovic.

Bedene admitted before his Philippe Chatrier debut that endurance had once been a problem, but not now: “I was really, really unfit when I started to play Grand Slams… well, for a professional. I was struggling.”

But the physical conditioning work he has done with Martin Skinner has brought other rewards, and although he did not beat Djokovic, the Briton played some fine tennis late into the evening gloom.

Talking at The Boodles, where Bedene today used the Stoke Park-hosted tournament to get some valuable match-play ahead of Wimbledon, he admitted that his physical resilience had also brought greater mental resilience.

“I haven’t had the best few weeks, but being healthy and fit always helps. Because before [when] I had worse weeks, then the head didn’t work well. So this time, I knew I was fit, so I kept going: I knew it would come eventually.”

“These players are a measure of how you’re playing… That’s the thing, you know. Because I was struggling a bit with confidence, and I wasn’t playing my best, but when I played with those guys, I played OK, my best tennis. It gave me some information, what I need to do to improve game-wise, what I need to work on.”

The results of the lightweight, 6ft tall Bedene have always suggested that he was more at home on hard and clay courts than on grass. But in truth, he has an all-round game that includes a surprisingly effective serve—he aced Pablo Carreno Busta 23 times on Paris’s heavy clay—some deft net skills, and some crafty slice on the backhand, as Robin Haase discovered on the low-bouncing Stoke Park grass. Above all, he has nimble, quick footwork—a great asset on grass. No wonder he felt right at home here.

“Yes, difficult conditions, wet, wasn’t perfect. But it’s grass, so it’s never perfect, but it was good. I felt OK.

“My game suits grass, which is great to see. It’s a unique surface so it’s never easy to adapt on it, but I have, so I’m playing well at the moment.

“And yes, it helps because I’m a lighter guy, so I can move well—and today was wetter but I was still moving OK.”

Confidence breeds confidence, and judging from Bedene’s relaxed demeanour, that confidence has brought a few other benefits. Asked how he felt about his recognition level with the home crowd these days, he smiled.

“It always helps when you play well at Roland Garros, especially against a world No1—and of course Andy at Queen’s! But yes, I’m totally fine with it. I was never used to that much attention, but I have embraced it.”

The draw for Wimbledon takes place on Friday morning. Bedene will no doubt be hoping that, for his home Major at least, he gets a favourable one.