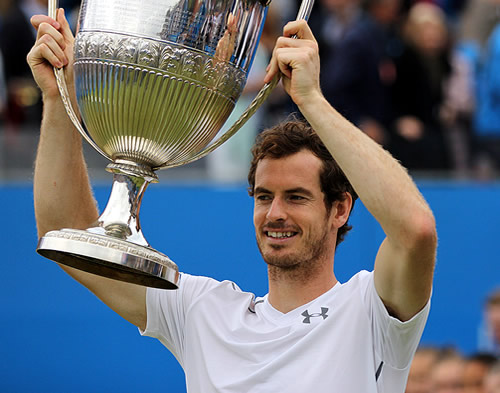 Until Andy Murray won the gold medal in singles at the 2012 Olympics, the last Briton to win a medal in the Games was one Major J G Ritchie— Josiah George.

That, too, was in London in 1908, and the Major won three of them: Gold in men’s singles, silver in men’s doubles and bronze in men’s indoor singles.

Murray of course won two medals of his own, gold in singles and silver in mixed doubles. But Murray has emulated Ritchie at another London venue, too.

Since the historic Queen’s championships began in 1890, only seven men other than Murray have held aloft one of the biggest silver trophies in sport four times, and the only other Briton on an illustrious list that includes Roy Emerson, John McEnroe and Boris Becker, is Richie.

Murray, in his typically low-key, laconic style, would not play along with any hype about one more ‘first since’ headline: “It would mean a lot. A lot of great players have played here over the years, and winning any tournament a few times is obviously hard. But this one in particular is a tough event to win… it would be nice to get a fifth title, for sure.”

Murray has faced some tough final opponents over the years. Most have been big servers, who invariably thrive on the slick, quick grass. In 2011, he took on Jo-Wilfried Tsonga, in 2013 it was Marin Cilic—who put up such a fight in the semi-final this year too—and last year it was Kevin Anderson.

But more formidable than all of those when it comes to serving power was the man he faced this time, the No3 seed and, this time last year, a top-four player. Injury, minor foot surgery and a few physical niggles this year saw him miss a few tournaments, but his consistency was returning with a vengeance.

In 2016, he had beaten Roger Federer to win the Brisbane title, made the quarter-finals of the Masters in Miami, Monte Carlo and Rome, the final in Indian Wells and, most significantly for this particular title match, the semis at the Australian Open. For in Melbourne, Raonic came within striking distance of beating Murray after winning two of the first three sets.

Raonic arrived here, his first grass-court final, with 31 match-wins, just one short of Murray, despite missing two scheduled tournaments along the way. He had, as well, proven grass credentials with a semi run to Wimbledon in 2014. And while he had never met Murray on the green stuff, the Briton knew the danger: “Obviously his serve is the biggest strength in his game, so if I get any chances, it’s important to take them, because there’s not going to be too many.”

But Raonic had a secret weapon this week too, in the shape of four-time Queen’s champion, John McEnroe. Murray had noticed a few tweaks already:
“Big serve, moving forward quite a bit this week, trying to come to the net as much as he can.” 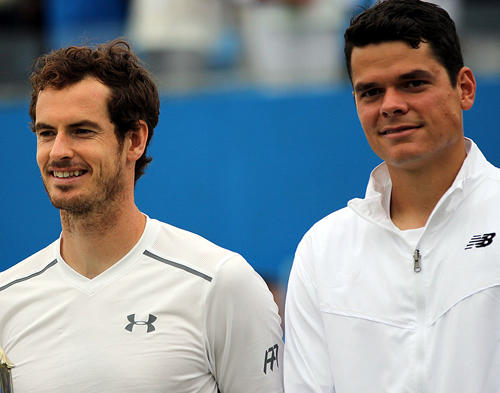 Not that Murray didn’t have a secret weapon of his own: He announced just ahead of the tournament that he had reunited after a two-year break with the 1989/1990 Queen’s champ Ivan Lendl, the man who steered Murray to two Grand Slam titles and Olympic gold.

But in the early goings, it looked as though McEnroe’s charge had the edge. Raonic served like a dream, chased into the net even on Murray’s serve, and pounded his one-two strikes—now serve and smash, now serve and forehand winner—to hold to love.

Not that Murray let him open up any distance. Aside from deuce on his opening serve, Raonic did no better than get to 30-30, and there would be not a break point between them all the way to a tie-break. Indeed both served superbly, at well over 70% and dropped only four and three points respectively on first serve.

In the deciding game, however, Raonic took the first advantage, 3-0, before Murray levelled at 5-5 with a winning baseline exchange. But serving at 5-6, Murray came to the net and saw a backhand flash past him for the set, 7-6(5).

Raonic maintained the pressure in the second, too: a love hold, a return of serve bullet on break point, and another love hold for 3-0, and it looked as though the Canadian would run away with it. Certainly McEnroe looked as though he thought so: He was on his feet for every winning point.

Gradually, though, came a sea-change as a couple of errors crept into Raonic’s net approaches, and Murray took advantage of a first Canadian double fault to fire a backhand return of serve on break point.

He looked increasingly pumped—Lendl not so much, even as his man cranked up the winners for 5-3 and then served out the set, 6-4.

Raonic took a comfort break, but it did not halt the momentum. He hit a forehand wide on break point while Murray, in contrast, aced to hold for 2-0, and became increasingly aggressive in his tactics. He would pick up 12 points from 13 at the net, and with two hours on the clock, it was the Briton making one-two strikes. He finished the match with a flourish, breaking for the set, 6-3.

He could not hide his pleasure, any more than the packed Centre Court could: “It was great. Obviously coming out here to win for a fifth time, I was really motivated.”

Then he looked to his box, noted the absence of Lendl, and with a wry grin added: “It was nice of him to stick around for the presentation.”

With Wimbledon around the corner, Murray’s timing could hardly be better. But it is typical of the man who, within moments of one of his finest days on a tennis court, he is already talking about work and ‘getting better’. He likes it that way, and clearly Lendl does too, and they had already chatted before he came to press.

“We spoke a little bit about today’s match but more about next week and planning for Wimbledon. You know, I like that. It’s sort of not concentrating too much on the win today. It’s like, OK, great, now what do we do to get better over these next few days to put myself in a better position for Wimbledon?”

But that, as much as talent, is what has got Murray where he is—a fine champion by any measure.