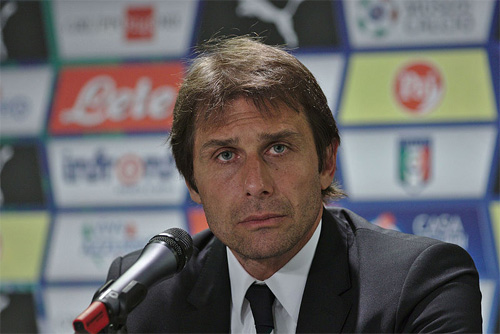 Antonio Conte will take over at Chelsea after Euro 2016 Photo: Wikimedia

Antonio Conte is keen on signing on a host of players this summer but Chelsea will only ramp up their interest after Euro 2016, The Sport Review can reveal.

The Blues are believed to be on the lookout for a number of new signings as Conte prepares for his first season in charge of the west London club.

The former Juventus coach is currently on duty with Italy at Euro 2016 in France and is not due to take over at Stamford Bridge until the end of this summer’s tournament.

Chelsea are being linked with a host of players as they look to bounce back from their disastrous campaign last term.

Now, Italian journalist Emanuele Giulianelli has told The Sport Review that Conte has his eyes on a number of transfer targets but will not ramp up his interest in them until after this summer’s tournament.

Giulianelli said: “He [Conte] is following a lot of players.

“I think he will decide more on how to concentrate as real targets only after Euro 2016.”

Among the players being linked with moves to Chelsea this summer are Paul Pogba, Kalidou Koulibaly and Alvaro Morata.