England take on Russia in Marseille on Saturday night as they kick off their hopes of winning Euro 2016.

The Three Lions head to France on the back of a perfect qualifying campaign in which Wayne Rooney broke the country’s all-time goal-scoring record to inspire his side to qualification.

Only six teams have qualified for the Euros with a perfect record, including the Three Lions this year. The others are France, the Czech Republic and Spain, Germany in previous years. 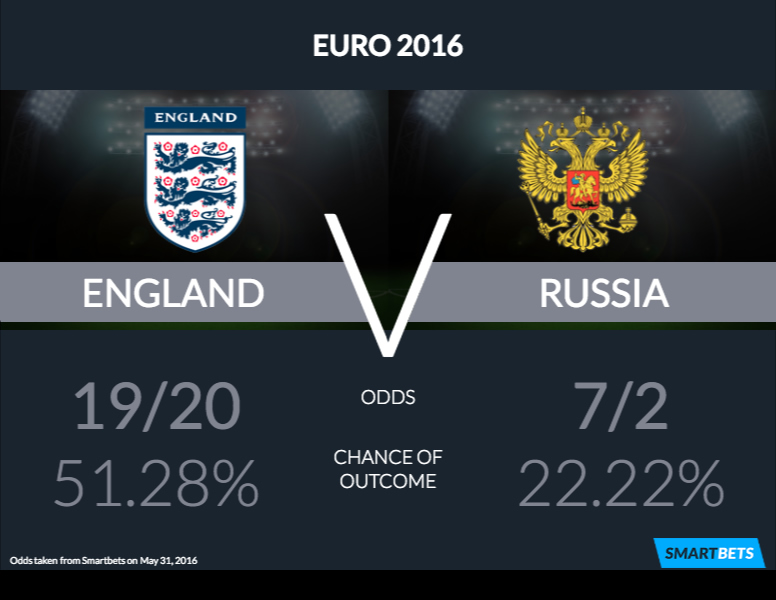 England are the favourites to beat Russia Photo: Smartbets.com

Skipper Rooney will be wanting to put a difficult domestic season with Manchester United behind him as he bids to lead his country to glory in France. The Red Devils finished fifth in the Premier League table but managed to end the campaign on a high by winning the FA Cup in what ended up being Louis van Gaal’s final game in charge.

Roy Hodgson’s men have been placed in Group B along with Russia, Wales and Slovakia as they bid to reach the knockout phase of the Euro 2016 tournament in France.

Their first test will be against Russia this weekend and the Three Lions know that getting off to a winning start will be crucial for their hopes in France.

Russia got the better of England in qualifying for Euro 2008, finishing second in the group behind Croatia, who won 3-2 at Wembley in their final qualifier to eliminate Steve McClaren’s side.

However, England have not lost over 90 or 120 minutes in 22 Euro fixtures, going back to the 3-2 defeat by Croatia in November 2007, although they were beaten on penalties by Italy in the Euro 2012 quarter-finals.

The Three Lions were, of course, semi-finalists as hosts in 1996, matching their previous best performance from 1968, when they came third.

Russia will of course present a stern test of England’s Euro 2016 hopes on Saturday evening in Marseille, but the Three Lions’ fine form heading into the tournament should offer plenty of encouragement for Hodgson’s men. The best betting odds on England to beat Russia on Saturday are around Evens – and we are expecting the Three Lions to deliver in their Euro 2016 opener. The Sport Review says: England 2 Russia 0.

What time does England v Russia kick off?