The much-anticipated battle of Britain takes place in Lens this afternoon as England take on Group B leaders Wales at the Stade Bollaert-Delelis. The odds favour an English victory in this clash of the home nations but given the results of their first games in the tournament, anything is possible.

Wales’ 2-1 victory over Slovakia matched by Slovakia’s 2-1 win over Russia yesterday puts Chris Coleman’s side in an excellent position ahead of their second game. Victory today would see them progress to the second round as group winners whilst a draw would keep them top of the group heading into their final group game with struggling Russia.

Roy Hodgson’s side enter this afternoon’s game under pressure after a dismal display and result against poor Russian opponents. The manager and some of the players’ comments in the pre-match interviews have hardly sent optimism through the country either. Many of their comments have been praising the opposition, most notably Gareth Bale, instead of striking up any confidence of their own.

England failed to cause Russia too many problems in their opener – scoring from a direct free kick and only Wayne Rooney testing Igor Akinfeev in open play. They then let the Eastern Europeans off the hook by conceding a stoppage time equaliser.

Can England improve? The manager’s tactical decisions and substitutions suggest not but he has some good players to help him out. Harry Kane played the full game on Saturday despite being physically tired in the second half. Raheem Sterling only came off at the end despite a terrible showing, whilst Adam Lallana got a full game.

Hodgson needs to be bold in his decisions today or it could be curtains for him. Jamie Vardy should have entered the field at some point versus Russia and certainly needs to take part in this afternoon’s game. Bale and Aaron Ramsey need to be watched carefully and chances need to be created for the striker; Kane had little supply last time out.

Wales showed great teamwork and determination in their European Championship debut on Saturday – and with a similar performance today you’d expect them to get something if not all three points if England underwhelm again.

Their defence looked tidy for the majority of the game, though Slovakia did scare them three times – one resulting in their sole goal. England created much fewer chances and scored half as many goals versus Russia than Slovakia did, so if anything you could say Wales have less to fear. Chris Coleman’s side also kept clean sheets in both qualifying games versus Belgium to show what they’re capable of.

The trio in midfield will be there to prevent Wayne Rooney taking control of the game, meaning England will need to use the wings to create space – something Danny Rose and Kyle Walker did well in the first game, but the same cannot be said of Sterling or Lallana. The English full-backs won’t be able to attack as freely as they did against Russia as Wales offer a much bigger threat on the counter-attack. 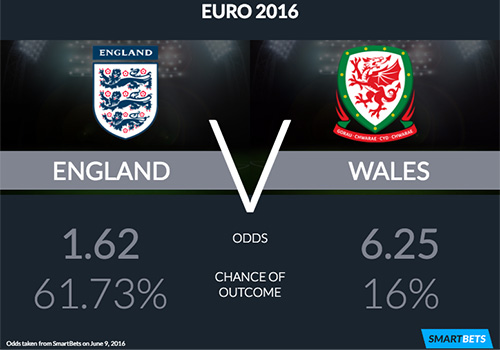 England have been training in both the 4-3-3 and 4-4-2 formations over the past few days, with Jamie Vardy and Daniel Sturridge both being considered. Though Hodgson is loyal to his players, one would have to think he’ll cave in to the criticism Sterling has received since the opening game and drop the Manchester City forward. Gary Cahill is the only player who risks suspension with a yellow card in this game.

Wayne Hennessey missed Wales’ first game with a back injury but is due to return today. Therefore Chris Coleman has a full squad to pick from and none of his players collected a yellow card versus Slovakia.

0 – Harry Kane didn’t have a single touch in the Russian penalty area in England’s opener.

1 – Gareth Bale scored with Wales’ first-ever shot on target in a European Championship.