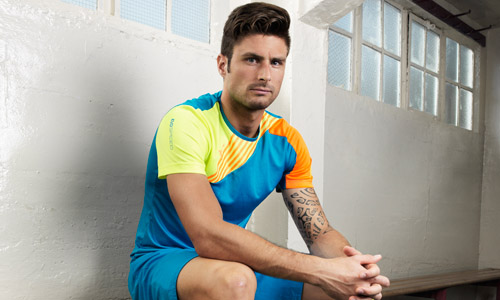 Will Olivier Giroud deliver for France against Romania? Photo: Puma

The wait is almost over, as hosts France prepare to kick off this summer’s Euro 2016 tournament with their clash against Romania on Friday night.

France, of course, qualified for the competition by default due to the fact that they are the host nation, so Didier Deschamps’s side are lacking in the competitive games department.

However, many are tipping Les Bleus to triumph on home soil.

France have some of the world’s most coveted players available for selection, including the likes of Juventus star Paul Pogba, who has been linked with a move to Manchester United, and Red Devils striker Anthony Martial, who impressed in his first season in the Premier League last term.

Looking ahead to the game itself, and Romania’s recent record against Friday night’s opponents does not make for good reading for the visitors.

France are unbeaten in their last 10 games against Romania, winning five and drawing five. Indeed, Romania’s last victory against France was their 2-0 friendly win in Bucharest way back in 1972.

France will be looking to build on their impressive record on home soil. They won all five of their games the last time they hosted the Euros back in 1984 on their way to lifting the trophy.

Romania’s only victory in 13 European championship games came back in 2000, when they beat England.

There is plenty to be lots of betting interest in the game given its high profile. France are currently the favourites to win at odds of around 3/10 with most bookmakers. The draw is priced at 4/1 and outsiders Romania can be backed at odds of around 11/1.

Sports betting in Canada is popular and there is sure to be plenty of interest in the game on Friday night from there and plenty of other countries worldwide due to the nature of the international competition.

The game will be played at the Stade De France in Paris as the French capital prepares to become the focal point of European football for the night.

What time does France v Romania kick off?

France’s home clash with Romania on Friday night at Euro 2016 kicks off at 20:00 BST. The game will be shown live on ITV1 for viewers in the United Kingdom.