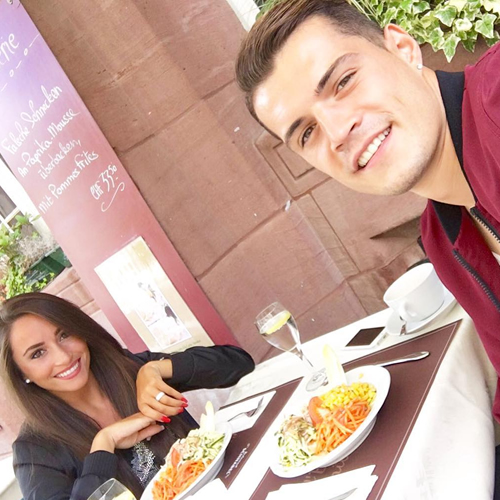 Granit Xhaka enjoyed a spot of lunch with his girlfriend Leonita Lekaj as the Arsenal new boy and his Switzerland team-mates prepare for Euro 2016.

The Switzerland midfielder was finally unveiled as an Arsenal player last month after weeks of speculation linking him with a move to The Emirates.

After completing his move to Arsenal, Xhaka has now turned his attentions towards this summer’s Euro 2016 tournament in France, which gets under way next Friday.

And Xhaka managed to enjoy some downtime with his partner on Saturday lunchtime as the build-up to the tournament continues.

Xhaka recently confirmed that he opted to change his squad number – which had initially been 16 – to 29 at Arsenal.

The number has special significance for him as it is the reverse of his year of birth – 92.