Who will be in Brazil's starting line-up for the 2016 Olympic Games? 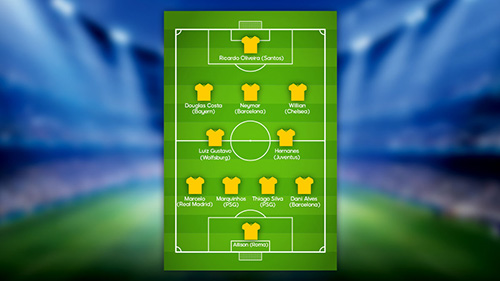 So far 2016 is a year that the Brazilian football team might prefer to forget. Admittedly, they’ve been making history, but it’s probably not the sort of history they want.

For, as every fan must know, they were knocked out of the Copa America at the end of the group stages for only the second time in the hundred years that they have been competing in the championship.

The team that beat them, consigning them to the early exit, was Peru, a nation that hadn’t beaten them for 31 years and, to make matters even worse, their single winning goal has been widely acknowledged as a hand ball.

Not surprisingly, the country has taken this badly and the first victim has been the hapless manager Dunga whose dubious attacking tactics and obscure team selections were seen as instrumental in bring about their failure.

So now Rogerio Micale, Brazil’s Under 20s coach, faces the potentially uphill task of putting together and motivating a squad capable of restoring the country’s footballing pride at this, their home Olympics.

There have been no shortage of suggestions and possible team line-ups put forward, including this one from distinguished ex-players like Denilson.

While the official squad line-up has yet to be announced there has been a limited release of information from the Brazilian footballing authorities as well as rumours and inferences arising from the facts.

Perhaps the most significant fact is that Barcelona’s Neymar, who features in Denilson’s 11 but who was not included in the Copa America squad, will be available. The Spanish team requested that he should be played in either the Copa or the World Cup but not both and it was decided to hold him in reserve for Rio.

In goal, Denilson’s first pick is Roma’s Allison and he is likely to also be the no.1 keeper for the games, ironically having had a pretty good Copa only letting in two goals in three matches, one of which should never have been allowed to stand.

Defensively, Denilson is also a big advocate of PSG Eindhoven’s captain Thiago Silva so the news that he is one of the five named “over age” players, who will eventually be whittled down to three, suggests that he is in with a good chance of playing.

One area in which the Copa squad were found to be distinctly lacklustre was in midfield with players like Lucas Lima, Renato Augusto and Elias under-performing. So the ex-international’s preferences of Luiz Gustavo and Hernanes of Wolfsburg and Juventus respectively could also well make an appearance.

In terms of strikers Denilson favours Ricardo Oliveiro but injury and age might rule him out, in which case Brazil will be looking for a replacement for the disappointing Gabriel.

So we’ll just have to wait until August 4th when Brazil square up against South Africa for their first match as host nation to see just who the starting 11 are. But one thing is for certain – and that’s that the men who do play will have the heavy burden of an expectant nation’s hopes sitting on their shoulders.