Jamie Vardy is already an Arsenal player, according to BBC Sport’s blog.

The British media giant may have let slip some insider knowledge regarding Vardy’s future after a slip-up during their live coverage of England’s 2-1 victory over Wales on Thursday afternoon.

Vardy has been heavily linked with a move to the Emirates Stadium as Arsene Wenger looks to provide much-maligned France international Olivier Giroud with more competition up front.

The 29-year-old came off the bench to score England’s equaliser against their neighbours and BBC Sport unwittingly – or perhaps, intentionally – described Vardy as an Arsenal player in their description of his goal. 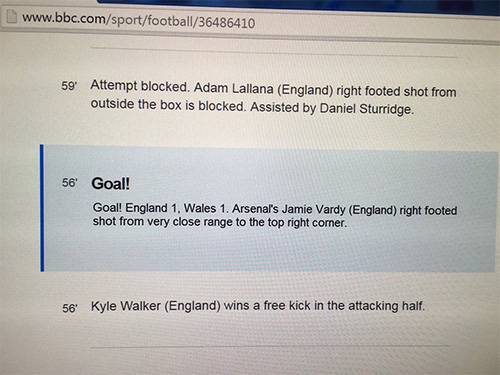 Arsenal finished in second place in the Premier League table.