Juan Martin del Potro is enthused, is fit, and as always, is wearing his heart on his sleeve ahead of Wimbledon 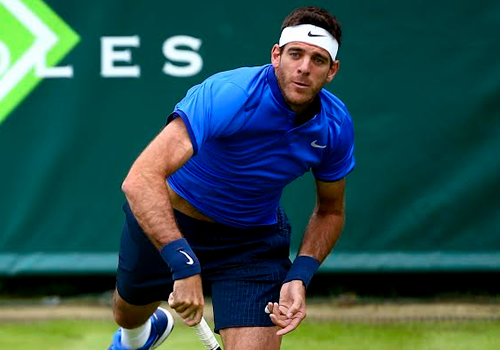 The introduction for Juan Martin del Potro, as he took to the lush turf of The Boodles event at Stoke Park, home to one of the best-heeled tournaments in the lead-up to Wimbledon, said it all. Here, ladies and gentlemen, was a man with one of the biggest and most ardent fan-bases in tennis.

Millions follow him on Twitter, millions more on Facebook, and it is easy to see why. Few will forget his appeal to Wimbledon’s Centre Court crowd back in 2013, in the longest semi-final in the tournament’s history against Novak Djokovic. The big man from Argentina eventually lost, but not before imploring the fans for help and then, in a moment of exhaustion, sitting on the barrier at the edge of the court, head bent in despair.

This week, on the opening day of The Boodles event in front of a crowd that is always keen to enter into the spirit of things, it was the same story. His win over teenage Borna Coric done, he gently placed his bandana on the head of a particularly enthusiastic fan—and then gave her a big hug.

And he hugs a lot, does Del Potro. Win or lose, whether the match short or long, he embraces his opponent like a long-lost brother. And John Isner, talking after their match at the Aegon Championships last week, made it clear this was no act:

“He just is [popular]. He’s pretty affable. He’s just a good guy. He’s so laid back. Everyone in the locker room likes him. He’s just a big chill dude, you know. I mean, really, you can’t find one person that could say one thing bad about him. He’s just a really good guy.”

And how many players, after an hour and a half of tennis, signing, and on-court interviews, would amble over to speak to one more reporter, dump his bags, and then fetch a couple of chairs to us to sit on?

For when all is said and done, it is hard to believe what Del Potro has been through since he hit the jackpot in 2009. He was two weeks short of his 21st birthday when he did what no man had done since Marat Safin in Janaury 2005 and would not do again until Murray in September 2012: deny a Grand Slam title to Roger Federer, Rafael Nadal or Novak Djokovic.

The towering teen from Argentina had started to make a mark in 2007, but at still just 19, he won four titles from five finals in 2008. Hints of what was to come surfaced at Roland Garros in 2009, where Federer had to fight back from two sets to one down to keep his French Open dream alive.

But come New York, with Federer the five-time defending champion and two sets to one up, Del Potro pounded his way back to win in dramatic style, becoming the first player to beat both Nadal—in the semis—and Federer in the same Major.

He ended the year in the top five, but Del Potro would be hit by the first of a succession of wrist injuries, surgery and comebacks.

He had wrist surgery in May 2010, and missed the rest of the season. In 2011, he made it back to No11, enough to earn the ATP’s Comeback Player of the Year award. The next year he won bronze at the Olympics, having been part of another epic battle with Federer in the semis—the longest best-of-three match ever—and reached at No7.

But his 2013 run to Wimbledon would be his last until he arrives in SW19 next week: Indeed he has not played any Major in over two years. The wrist troubles returned in Dubai 2014, followed by surgery, and then more surgery at the start of last year. From the start of 2014 to the end of 2015, he played just 14 matches.

Little wonder that Isner was so impressed by Del Potro: “I think last week was his first grass match in years, so I can’t imagine what he’s been through. I don’t know if he’s 100 percent healthy right now, but tennis definitely needs him in the game. Everyone is wishing him continued health and success because tennis is a lot better game when he’s around.”

So with Wimbledon just days away, we cut to the chase: How has it felt to get back on grass?
“It is good for me after three years without playing on this surface. At the beginning, was really complicated for me but now I’m starting to remember how the game feels on grass. I’m feeling good, my movement is OK, I need to be faster than I am feeling now, but that takes time. I have to work hard for that and maybe next year I will be 100 percent to play a Grand Slam event.”

He was reassured, too, that after back-to-back grass events—he made the semis in Stuttgart and played both singles and doubles at Queen’s—things felt good.

“Two events before Wimbledon is good for me. My wrist has responded well, and I’m not having any other problems with my body, which is good for the future. I have been practising hard on grass and I think I will be ready. I will have a tough draw for sure because I’m not a seeded player. But this is my present now, and I’m so glad to be play Wimbledon again after the semi-final three years ago.”

He had not, he admitted, found the green stuff easy in the early days, but that had not deterred him: “I came two weeks early one year to learn about grass courts and I got good matches in 2009—and then I started to play much better. I got an Olympic medal and made semi-finals [at Wimbledon]— and I like to play on grass now. Really!”

Light-hearted as his match on a humid overcast Tuesday in the heart of Berkshire was, there is no mistaking some adjustments to the game that won him that Major so long ago. He agreed.

“Of course. I am playing more slices now and serving and volleys all the time, and I am putting all my game around my backhand, working on my volleys and slices and forehands because I am not feeling 100 percent healed [to play my] best backhand. For the moment, I am playing another game, but in the future we look forward to playing like we did in the past, because my wrist will be solved, fixed and that’s what I’m looking to do as soon as possible.”

While, as Isner said, Del Potro is laid back, there are clearly healthy doses of pragmatism and stubbornness in the mix too.

“I was really sad in the past. [But] I had two choices: One is to watch the tournaments at home, and one is staying here and fighting my situation. And I know it’s a big challenge for me because I have to deal with my pain, be strong enough mentally to survive this kind of situation, but in the end I want to play tennis for more years, and I’m here for that.”

His will use the remains of his protected ranking through Wimbledon, the Olympics and on to Cincinnati, and at every one, you can be sure the seeds will cross fingers and toes that he is not their first opponent.

For looking at his forehand, his ventures to the net, even his heart-stopping dive to the soft turf of Stoke Park, he is enthused, he is fit, and as always, is wearing his heart on his sleeve. Isner is not wrong: Tennis is a lot better when he’s around.