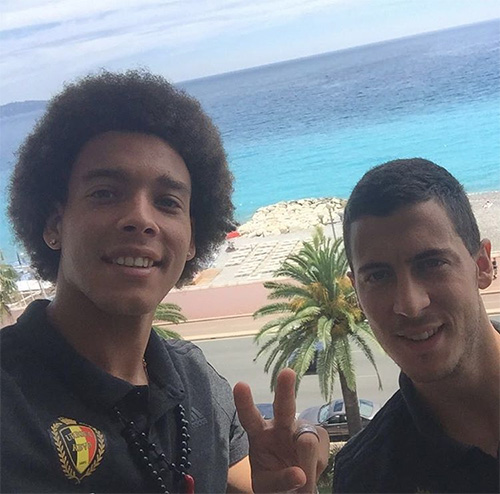 Eden Hazard was all smiles with Axel Witsel ahead of Belgium’s clash against Sweden on Wednesday night.

The Zenit St Petersburg midfielder has been trying to impress potential suitors with his Euro 2016 performances after revealing that he is open to a move away from Russia this summer.

The 27-year-old is thought to have a price tag in the region of £20m as Mauricio Pochettino looks to strengthen his squad following a disappointing end to an otherwise positive Premier League season.

And Chelsea forward Hazard was all smiles with the Spurs target as the Belgium duo relaxed ahead of their final Euro 2016 group-stage fixture against Sweden on Wednesday night.

Tottenham finished in third place in the Premier League table last season after a 5-1 loss to Newcastle United on the final day of the season.